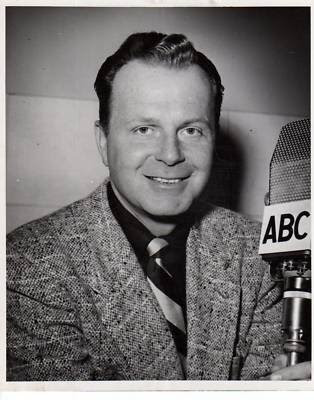 Ronnie Kemper (b. 1 August 1907, Missoula, Montana, USA, d. 16 February 1997, Sacramento, California, USA) was a big band singer and pianist known for his recording of "Cecilia."
A native Californian, Kemper developed as a musician in high school and in 1930 joined the dance band of Dick Jurgens. The band regularly played Chicago's Aragon Ballroom and the Catalina Casino. Kemper also sang with Horace Heidt and his Musical Knights and appeared with them in the 1941 movie "Pot O'Gold." 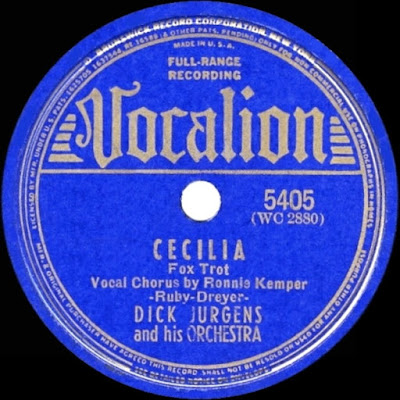 Recorded January 23, 1940, Ronnie Kemper's best-remembered vocal with the Jurgens band is a somewhat over-the-top performance, perhaps partially inspired by the stylized delivery of 'Whispering' Jack Smith, who had initially helped popularize this tune back in 1926.
He used this reputation to piece together his first dance band in San Francisco with vocalist Ruth Russell. The most notable musical sideman was Claude Gordon, who would later form a dance band in his own right. Original compositions were written for the purpose, including ‘It’s A Hundred To One (I’m In Love)’, ‘Knit One - Purl Two’, ‘The Doodlebug Song’ and ‘What You Gonna Do With Somebody Else’, though their theme tune remained ‘Cecilia’, which always garnered a rapturous reception from audiences. ﻿

Kemper also recorded "I'm a Little Teapot."
However, Horace Heidt was reluctant to free Kemper from his contract with him, which stipulated that his musicians could only be released if America was attacked during World War II. Luckily for Kemper, a Japanese submarine made a token effort at bombarding Brookings, Oregon, in the summer of 1942 and thus facilitated Kemper’s freedom.
Kemper took up the cudgels and began touring in earnest, but his career ended prematurely when he was, ironically, called into the services himself. After the war ended he chose not to pursue his band leading career. 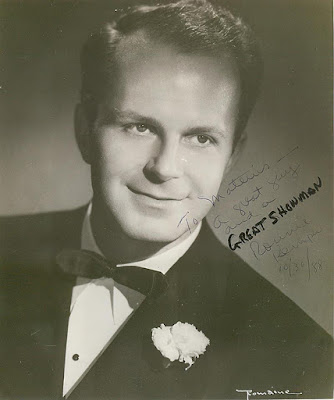 The singer also had a radio show based in Los Angeles and hosted "Kemper's Kapers" on Channel 13. He played for many years at San Francisco's Domino Club and organized "Kemper Clambake" variety shows for that city's Press Club. He later performed in Sacramento and on cruise ships. Kemper led a drive in the mid-1980s to place a historical plaque at the site of the former Rendezvous Ballroom in Newport Beach.
He died On Feb 16, 1997 in Sacramento of a heart attack.
(Info edited from Los Angeles Times & AMG)
Posted by boppinbob at 06:53