Ernest Loring "Red" Nichols (May 8, 1905 – June 28, 1965) was an American jazz cornettist, composer, and jazz bandleader. Over his long career, Nichols recorded in a wide variety of musical styles, and critic Steve Leggett describes him as "an expert cornet playerand a solid improviser".

Jazz Bandleader. Born in Ogden, Utah in 1905, at the age of four he was playing a cornet, but was also thoroughly schooled in violin and piano. By age 6 he was appearing at socials and in street parades. At age 12 he played dance music in his father’s dance band. In spite of his strict musical upbringing, he loved jazz, and left home at 17 for New York City. There a young Red Nichols was in demand for his keen ability to sight-read. He recorded for Thomas Edison, and formed a jazz band and signed with Brunswick as “Red Nichols and the Five Pennies”. In addition, he also recorded as “The Red Heads“, “The Charlston Chasers,” “The Louisiana Rhythm Kings“, and “The Arkansas Travelers“ for other labels. 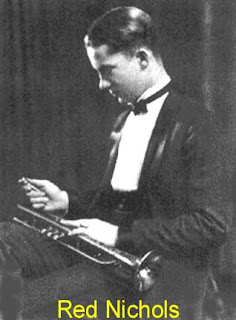 Returning to small group jazz in the late 1930's, he traveled between the East and West coasts, but when his daughter became gravely-ill in the early forties, he and his wife Willa moved to San Leandro, California, where she lived with relatives while his band toured (his daughter eventually made a full recovery). He quit the music business and went to work in the shipyards during the war. Eventually he put the “Five Pennies” back togethera s a Dixieland sextet, regaining his popularity playing clubs, particularly after bass saxophonist Joe Rushton became a permanent member, it was one of the finer traditional jazz bands of the next 20 years.


Nichols recorded several memorable hot versions of "Battle Hymn of the Republic," the best being in 1959. That same year a highly enjoyable if rather fictional Hollywood movie called The Five Pennies (and featuring Nichols' cornet solos and Danny Kaye's acting) made Red into a national celebrity at the twilight of his long career. Nichols' earlier sessions have been reissued in piecemeal fashion during the digital era, with later albums remaining unavailable. 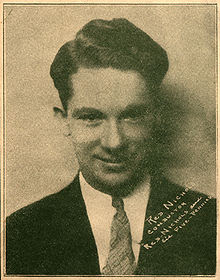 The film brought him new fame, and he toured Europe as an Ambassador of Goodwill for the United States State Department. The band recorded albums for Capitol Records, and played lucrative engagements.

In 1965 Nichols took his Five Pennies band to Las Vegas, to play at the then-new Mint Hotel. He was only a few days into the date when, on June 28, 1965, he was sleeping in his suite and was awakened by paralyzing chest pains. He managed to call the front desk and an ambulance was summoned, but it arrived too late. That night the band went on as scheduled, but at the center of the band a spotlight pointed down at an empty chair in Nichols’ customary spot. Red’s bright and shiny cornet sat alone on the chair. Around it swirled the “happy music” Nichols had loved all his life. 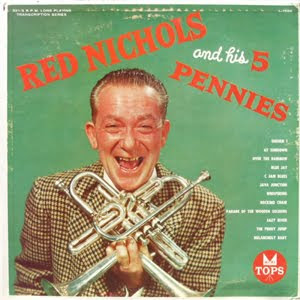 In spite of the controversy surrounding his work, Red Nichols was the most recorded and successful musician-bandleader in New York in the 1920s. He led enormously popular bands—featuring some of the most creative white jazz players of that time —under names, such as The Five Pennies, The Red Heads, and Miff Mole and His Little Molers. This voluminous output of recorded work—Red appeared on about 4,000 recordings in the 1920s—is recognized today as a major expansion and refinement of the harmonic and compositional possibilities in jazz. 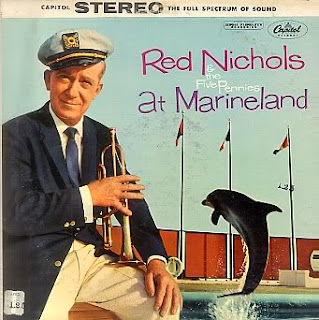 The University of Oregon (Eugene), houses his personal papers; his private collection is in the Archives of Recorded Sound, University of Kansas, (Lawrence). (Info edited from mainly Wikipedia, All Music and bio by Verne Langdon) 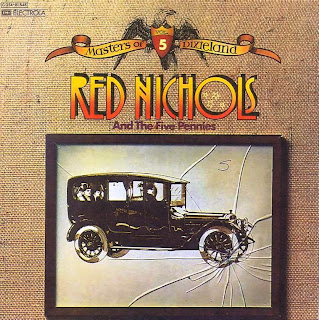