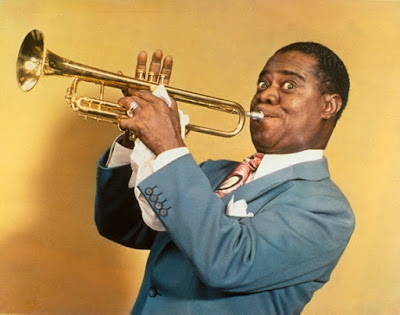 Louis Armstrong (4 August 1901* – July 6, 1971), nicknamed Satchmo and Pops, was an American jazz musician. Armstrong was a charismatic, innovative performer whose inspired, improvised soloing was the main influence for a fundamental change in jazz, shifting its focus from collective melodic playing, often arranged in one way or another, to the solo player and improvised soloing. One 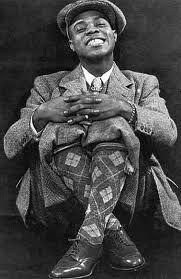 of the most famous jazz musicians of the 20th century, he first achieved fame as a cornet player, later on switching to trumpet, but toward the end of his career he was best known as a vocalist and became one of the most influential jazz singers.
Perhaps if he hadn’t fired that borrowed pistol into the air to celebrate New Year's 1913, Armstrong might have never been a professional musician at all. The frightened 12-year-old boy was arrested by a very annoyed police officer and sent to the New Orleans Coloured Waifs' Home for Boys to ponder his infamy. Fortunately for Louis, and the musical world as well, he fell under the influence of Peter Davis, the home’s musical instructor. Davis recognized the talent in the young black boy. He taught him singing, percussion and, finally, the trumpet.
Fortune turned her back on him at first. Louis Daniel Armstrong 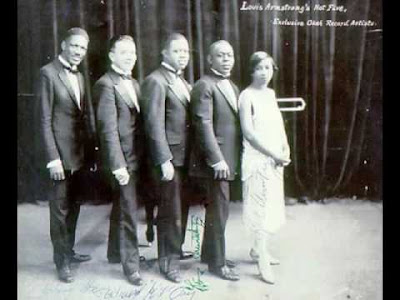 was born on August 4, 1901, in the Storyville District of New Orleans. It was a rough and tumble neighbourhood, populated by street toughs and so crowded that one could barely find standing room. His father was a labourer who abandoned the family soon after Louis’ birth. His mother was a part-time prostitute.
Young Louis was desperately poor. His only way to earn a living -- other than stealing, which he never resorted to -- was to sing on street corners for nickels. The gun incident in 1913, and his subsequent incarceration, made Louis determined to wiggle from the grasp of poverty.
﻿
Louis was released from the boy’s home when he was 14. He worked at any honest job that would provide food for his aching belly. At night, he haunted the dive bars that dotted the Storyville District, listening to the jazz bands that were just coming into prominence. His favourite musician was Joe “King” Oliver with the Kid Ory Band.

Oliver took a liking to the friendly, earnest young man and became his mentor as Peter Davis had done a few years before. By the age of 17, Armstrong and his horn sat with several of the numerous bands that played New Orleans. 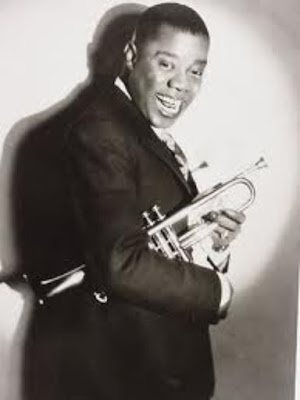 In 1919, Armstrong was so deft that he moved to St. Louis to join Fate Marable’s band. It was an exciting two years for young Louis because Marable’s band played on paddle wheelers owned by the Streckfus Mississippi Boat Lines. The young musician spent most of his time playing the river and playing to appreciative riverboat passengers.
In the meantime Louis’ mentor, King Oliver, left Kid Ory and had formed his own ensemble. After Oliver moved to Chicago, Louis returned to New Orleans and replaced him in Kid Ory’s Band. Three years later, with speakeasies booming in the Windy City, Oliver sent for Armstrong to join his Creole Jazz Band. It was there that Armstrong fell in love with, and married, Lillian Hardin, Oliver’s pianist. 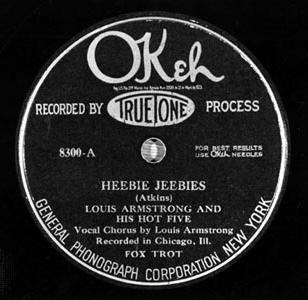 By the middle 1920s, Louis Armstrong’s star was rapidly rising. He formed a band called the “Hot Five” and cut his first records for Okeh in 1925, including the famous rendition of “St. Louis Blues” with Bessie Smith. The Hot Five -- later the Hot Seven -- existed for three years, but never played a live date. Rather it was formed for recording purposes only. In the meantime, Armstrong continued playing in other bands.


By 1929, Louis Armstrong was becoming a very big jazz star. Now he had his own performance group -- Louis Armstrong and the Stompers. He also toured with the show “Hot Chocolates”. But small bands were on their way out. It was the 1930s and swing was in vogue. That meant bands had to be larger. Armstrong moved to 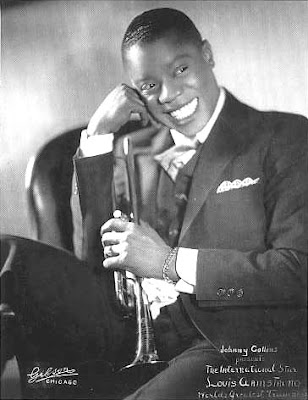 Los Angeles and organized a group called Louis Armstrong and his Sebastian New Cotton Club Orchestra. But he was unwilling to settle in one place. He and Lillian Hardin had divorced so he was footloose.
Armstrong travelled to Chicago where he organized a touring band. Their first stop was New Orleans. His friends from the old days remembered him well and welcomed him with open arms, but elements of the white population greeted the conquering hero with less enthusiasm. Armstrong got a bitter taste of racism when a white radio announcer refused to announce his name on the air in connection with a free concert -- simply because he was black.
Nevertheless, Armstrong’s touring band was an immense success. 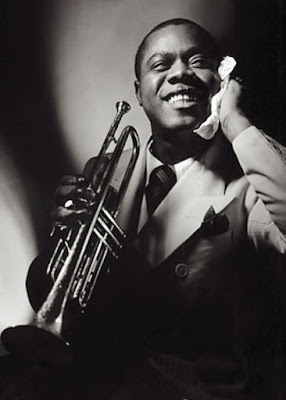 Not only did he extensively tour the United States, but Europe as well. When he returned in 1935, he hired Joe Glaser as his manager. Glazer remained until Armstrong’s death in 1971.
By the end of World War II, swing music was on its way out and bands, again, became smaller. At a Town Hall concert in New York, he introduced the six piece group that he would use off and on for the rest of his life -- the All Stars. They complimented his style perfectly.

In the 1950s, Armstrong teamed up with other singers to make recordings -- Bing Crosby, Louis Jordan and Gary Crosby. Then in 1957, he made some tracks with Ella Fitzgerald, backed up by the Oscar Peterson trio. While working with Peterson, Armstrong took to opportunity to record his first big hit to feature his famous throaty voice -- “Mack The Knife”. Other hits followed -- “Hello, Dolly” and “What A Wonderful World”. His popularity had now reached its zenith. Armstrong toured the 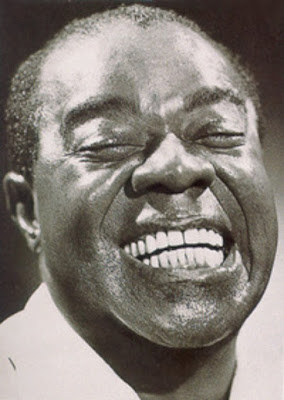 world as an unofficial goodwill ambassador for America. Then his health began to fail him.

For the last three years of his life he was in and out of the hospital, but he continued recording and performing until July 6, 1971 when he died in his sleep at home in Queens, New York. With Louis Armstrong’s death, jazz had lost its greatest master.
*Armstrong said he was not sure exactly when he was born, but celebrated his birthday on July 4. He usually gave the year as 1900 when speaking in public (although he used 1901 on his Social Security and other papers filed with the government). Using Roman Catholic Church documents from when his grandmother took him to be baptized, New Orleans music researcher Tad Jones established Armstong’s actual date of birth as August 4, 1901. With various other collaborative evidence, this date is now accepted by Armstrong scholars.  (info mainly from mnmn.essortment.com)

There are so many "greatest of" Armstrong compilations that the instinctive reaction upon seeing another is to roll the eyes. But HOT FIVES AND HOT SEVENS is truly outstanding. Concentrating solely on Armstrong's earliest work (before he became more of an entertainer than an artist), these revolutionary 1926-1928 sides find Satch at his innovative best, blazing new, and utterly unique trails into the world of modern music. Work from his Hot Fives group, like "Cornet Chop Suey," and "Heebie Jeebies" (featuring the first recorded scat vocal), alternates with such classic ragtime rave-ups las "Struttin' With Some Barbecue" and "Potato Head Blues."

Armstrong's trumpet is like a beacon of light and, on such tracks as "I'm Not Rough" and "St. James Infirmary," his vocals are full of warmth, humor, rhythmic innovation, and a tinge of melancholy. The untouched original mono recordings make for a thoroughly pleasurable and genuine listening experience--with remarkably strong fidelity. In short, these are some of the best and most important recordings in the history of jazz. This "greatest" compilation lives up its claim. (Liner notes: Ray Crick)