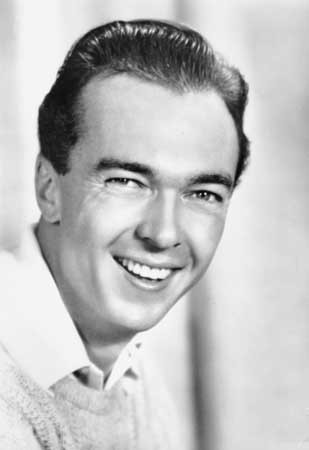 Edgar Clyde "Skinnay" Ennis, Jr. (b.13 August 1907, Salisbury, North Carolina, USA, d. 3 June 1963, Beverly Hills, California, USA.) was an American jazz and pop music bandleader and singer.
Ennis was born in Salisbury, North Carolina, and some sources list his name as Robert, while others claim that it was Edgar Clyde. This indeterminacy about his given name, by the way, was 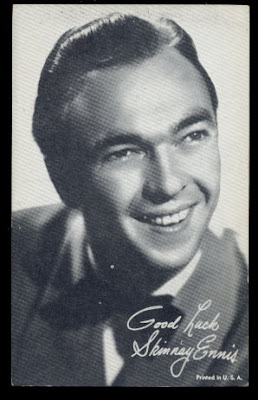 apparently encouraged by Ennis himself and was often cause for comedy on many of his radio shows.
Ennis met orchestra leader Hal Kemp in 1927 while both were attending college at the University of North Carolina. Kemp picked Ennis to play drums in his campus band, the Carolina Club Orchestra, and when Kemp left UNC to form a professional jazz band later that year Ennis went with him. Kemp also encouraged him to sing. Ennis would step away from his drum kit and take the mike.
His singing style was shy and breathless and proved a perfect match for the unique style of sweet dance music that Kemp's orchestra came to play by the mid-1930s. Ennis was able to turn what might otherwise seem like a weakness into a stylistic trademark, and he was featured on many of Kemp's 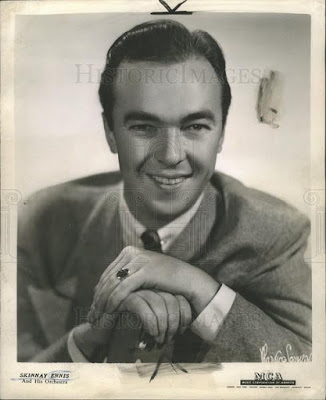 classic sides, such as "Ah! But I've Learned," "Shuffle Off to Buffalo," "Forty-Second Street," "Moonlight Saving Time," and the tune that would forever be associated with Ennis—"Got a Date with an Angel." He quickly became popular with female audiences and was soon the band's biggest star.
In hindsight, it seems that Ennis's approach to the vocal art may have, at least initially, influenced by the style of Whispering Jack Smith, a 1920s crooner who was very popular around the time that Ennis began to step up to the microphone. 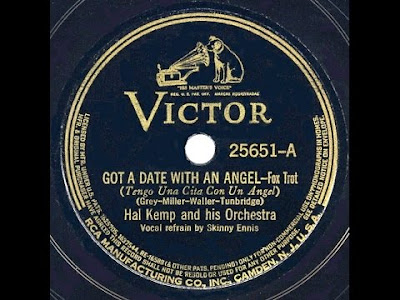 Ennis played with Kemp's orchestra up to 1937 including one tour of Europe in 1930. He formed his own band in 1938 which became a popular ensemble in Hollywood films. "Got a Date With an Angel" was his theme song. The new group featured arrangements by Claude Thornhill and Gil Evans. Ennis soon found a home on Bob Hope's radio show. Hope helped promote him by making him an integral part of each program. Playing Hope's stooge, Ennis gained nationwide exposure and popularity for his new group and was in demand for personal appearances throughout the summer off season. 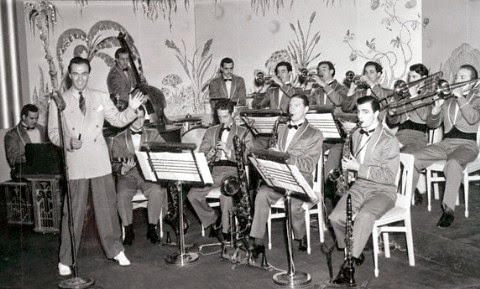 In 1940, when news of Hal Kemp's untimely death reached him, Ennis briefly returned to help out with Kemp's orchestra. Ennis's commercial recordings after 1941 are not listed in the jazz discographies. From Billboard magazine ads one can conclude that he recorded at least four sides for ARA, which was a Hollywood-based record label operated by Boris Morris and his son, circa 1944–1946. Ennis was sidelined for a short period by WWII when he conducted his own service band but returned to Hope's program after his discharge in 1946, where he remained until 1948. He then settled into a long run on the Abbott and Costello radio show. Ennis continued working with big bands and small groups mostly in hotels in the Los Angeles area up to his death in 1963. Skinnay Ennis, always an easy-going, gentle, and likeable man, died while choking on food in a Beverly Hills restaurant. (Info compiled mainly from Solid!)

Thanks Bob. Always a great post on your blog.