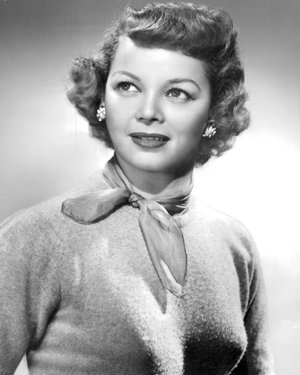 June Hutton (née June Marvel Cowan; August 11, 1919 Bloomington, Illinois – May 2, 1973 Encino, Los Angeles) was an American actress and vocalist, popular with big bands during the 1940s. She was the younger sister of vocalist Ina Ray Hutton.
Hutton's parents were Marvel Svea Williams and Odie Daniel Cowan. June and her older sister, Ina Ray Hutton, both grew up to be entertainers and performers during the Big Band era.
Growing up in Chicago, Hutton attended Hyde Park High School, 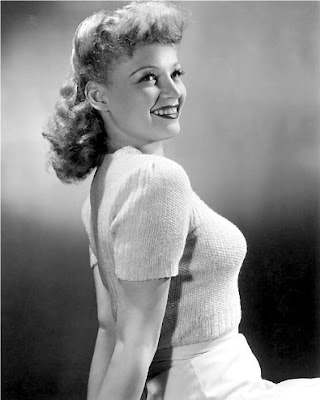 as did her older sister, Ina. While attending high school, she worked in the dress department at Marshall Fields department store. After graduating, she quit her job and pursued her singing career.
In her early days, she sang at the "Astor Roof" in New York City. After singing with her sister's orchestra in 1938, she was part of the Winston Trio, the Quintones, and the Sande Williams Band. She appeared with the Quintones in Hi Ya, Gentlemen, a failed musical with boxer Max Baer. In 1941, she became the female vocalist for the Stardusters, the singing group of Charlie Spivak & His Orchestra. Notable hits during her Stardusters years are "This is no laughing matter" and "Brother Bill" while she is heard solo on "Dreamsville, Ohio".
In June 1944 she replaced Jo 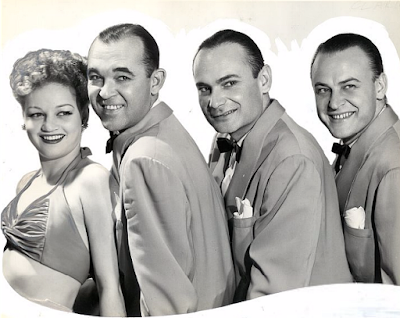 Stafford with vocal group The Pied Pipers. Before recording as part of this world famous quartet, a solo record was released in 1944 with Paul Weston's orchestra: "Don't you know I care?" b/w "Sleigh ride in July". Although popular, it never entered the charts. With The Pied Pipers, however, she recorded many hits among which "Lily Belle", "Mam'selle", "In the middle of May", "My happiness" and, of course, chart-topper "Dream", the group's theme song. Vera-Ellen starred with Danny Kaye in "Wonder man" (1945). June Hutton provided for her singing voice on "So in love".
In 1950 she left the group to start a solo career. Several sides were cut for Decca, including Mary Lou Williams' "Walkin'" and a 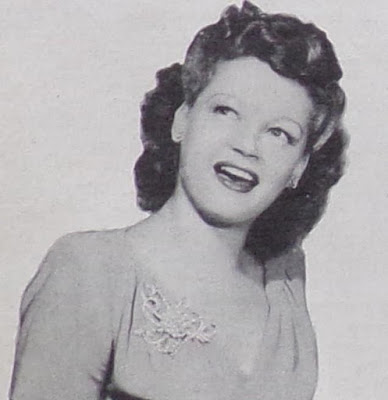 beautiful rendering of "Dancing on the ceiling", accompanied by Artie Shaw's Gramercy Five. Hardly any of these Decca recordings have ever been re-issued, which make the original 78's from the early fifties true collector's items, since they are very hard to find!
In 1951 she was a regular guest on Frank Sinatra's first television show. Some of these shows (with June) have been released on video and some of the Sinatra/Hutton duets can be heard on Frank Sinatra's CD "There'll be some changes made - The rarities: 1950-51". That same year she got married to bandleader Axel Stordah. 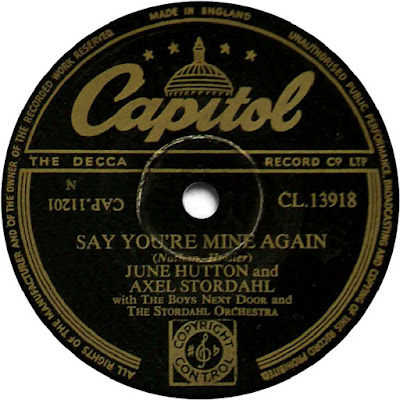 In 1952 she switched to Capitol Records where husband Axel Stordahl accompanied her on all of her records, most of the time along with vocal group The Boys Next Door. Many of these 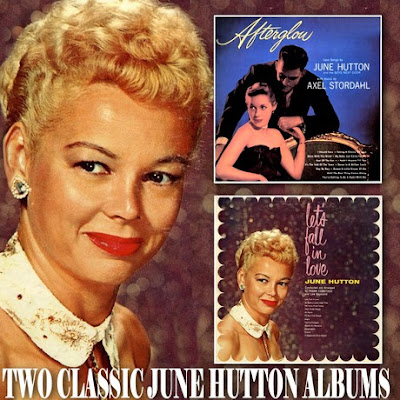 recordings are slow, lush, romantic love songs and in 1953/'54 she scored a few hits as well with "Say you're mine again", "No stone unturned" and "For the first time". She also cut a few duets with Gordon MacRae. She would stay with Capitol until the mid-Fifties. Her 1955 LP "Afterglow" was re-issued on CD a few years ago, yet her many singles from her Capitol years are only available on 78s or 45s.
A week after Tommy Dorsey's death in November 1956, there was a televised tribute by artists who had worked with TD such as Paul Whiteman, Jo Stafford, Connie Haines and Dick Haymes. Frank Sinatra was not there, but Vic Damone sang some of his songs. June Hutton sang lead with the Pied Pipers for this special 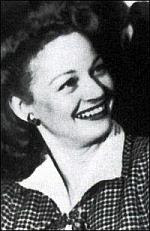 
In 1957 she recorded an excellent stereo album (her last) with a small group backing her for TOPS Records. In years to come it would be re-issued on other labels as well. By the late 1950's she had retired from show business.
Stordahl died in 1963, and Hutton married actor Kenneth Tobey in 1968. They divorced in 1972. The music world lost a wonderful and warm voice on May 2nd, 1973 when June Hutton died at only 52 in Encino, California. She was buried with Stordahl in the same plot at Forest Lawn Memorial Park (Glendale)  although only his name is on the marker. (info compiled from Wikipedia & geocities.com)


Vocalist June Hutton chats with Guy Lombardo and sings "P.S. I Love You" in this rare 1955 TV appearance.
Posted by boppinbob at 15:12

Thanks Bob. I didn't know she was with the Pied Pipers.