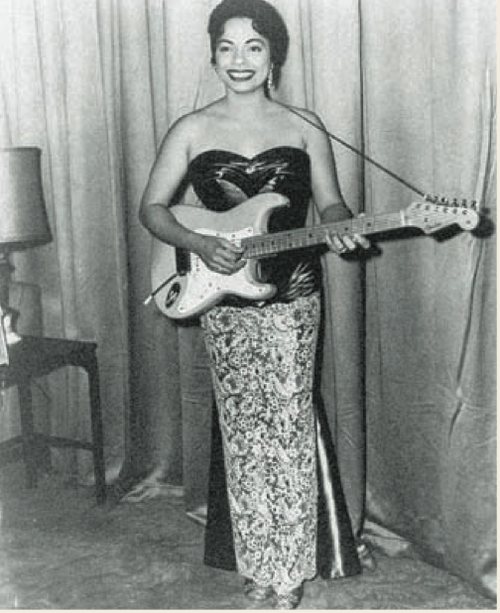 Mary Kaye (January 9, 1924 Detroit, Michigan – February 17, 2007 Las Vegas, Nevada) was a guitarist and phenomenal singer who was active from the 1940s through 1960s. She was known as the “First Lady of Rock and Roll” for her guitar-driven, calypso-tinged, swing music. 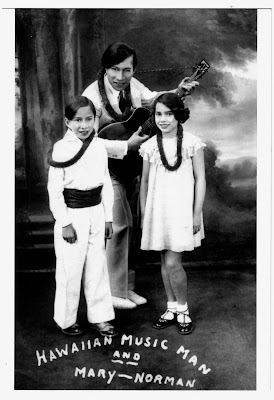 Mary Kaye (born Malia Ka’aihue) descended from Hawaiian royalty in the line of Queen Liliuokalani, Hawaii’s last reigning monarch, and was born into a show business family. She & her brother Norman Kaaihue appeared with their father Johnny Kaaihue from the time when they were small children under various names until she & Frank Ross along with Jules Pursley formed “The Mary Kaaihue Trio”.

When Norman was discharged & replaced Jules they renamed the partnership” The Mary Kaye Trio”.  When Jules returned from military service he & Mary were married & he became their stage manager. The band grew to popularity in the 40’s, 50’s, and 60’s, playing many shows. 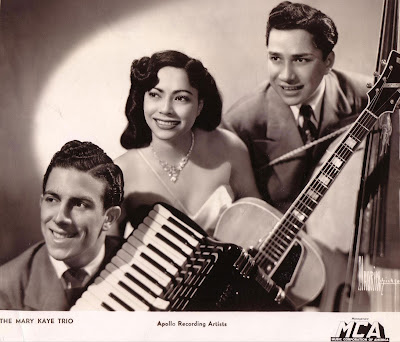 The Mary Kaye Trio is credited with founding the Las Vegas “lounge” phenomenon at the Last Frontier in 1953, an all-night party atmosphere where stars and common folk rubbed elbows in a freewheeling environment.

The Trio became a favourite of the stars. On any given night, celebrities like Ella Fitzgerald, Judy Garland, Sammy Davis Jr., Betty Hutton, Milton Beryl, and Liberace rubbed shoulders with regulars at the groups show.” Elvis, Frank Sinatra, and Chuck 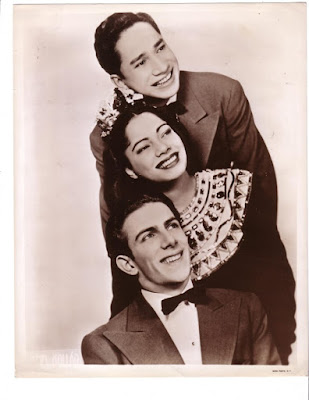 Heston were among also fans. 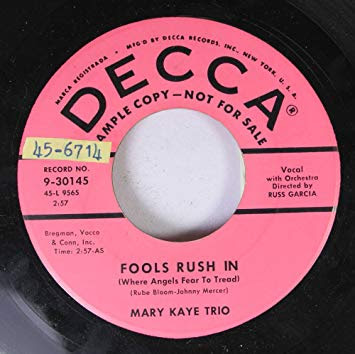 George Schlatter producer of Laugh-In, at the 75th Anniversary celebration of Las Vegas Entertainment announced “The greatest act ever to play Vegas was The Mary Kaye Trio” As a Vegas booking agent in the1950s he recalls the Trios engagements at The 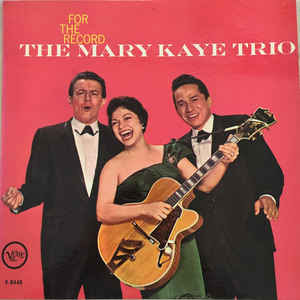 Last Frontier “by the third night you can’t move. They’re the biggest hit on the Strip, because at that point there was no Rickles there was no Louis Prima and there was no Shecky Green. The Mary Kaye Trio changed the history of Las Vegas. They were all over the room, & they were hysterical. Anybody who ever saw the act realized this was the most sound you ever got out of three pieces. And goddamn, they were funny!”

After the Mary Kaye Trio dissolved in 1966, Mary worked solo, then with Frank & Norman’s blessing she tried starting another Trio. She later originated a line of Mary Kaye dolls & various business interests. 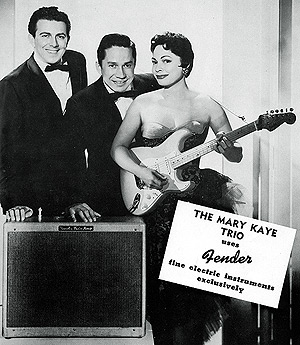 Mary was photographed with her partners Frank Ross & Norman Kaye of the Mary Kaye Trio, in a 1956 Fender promotional advertisement featuring a new Stratocaster electric guitar. It became known as “The Mary Kaye Strat” that she would become forever associated with. And while Kaye never actually owned the guitar, the photo wasn’t the only time she was seen using it. At the time, she actually favoured custom D’Angelicos 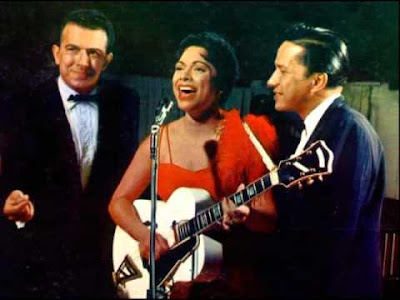 A limited Custom Shop series Mary Kaye Tribute Strat was issued in 2005.  In 2007 a 57 Reissue Mary Kaye Strat was released for the 50th anniversary of the Stratocaster. 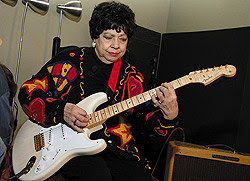 Mary was inducted in the Musicians Hall of Fame, and with her incredible talent, she had no equal. She died in a Las Vegas hospital of pulmonary disease on February 17, 2007.

Frank Ross passed away in Hermosa Beach, Ca. in 1995. Norman Kaye continued with the Norman Kaye Realty, and was active in Nevada ventures and continued as Nevada’s Poet Laureate until his death in 2012. Marys son Jay Kaye was also a musician, known as the ” Blue Messiah ” in Spain where he passed away in 2015.

AllMusic Review by Jason Ankeny
Music on a Silver Platter pairs the Mary Kaye Trio with celebrated arranger Russ Garcia, whose richly nuanced, imaginative approach perfectly complements the group's energetic harmonies. While Garcia and co-arranger Jud Conlon keep the spotlight squarely on the trio's powerhouse vocals, their colorful orchestrations also push the group in bold and sophisticated new directions, reining in Frankie Ross' broader comedic impulses while emphasizing Norman Kaye's talents as a multi-instrumentalist -- the resulting vocal performances rank among the Kayes' jazziest and liveliest, galvanizing familiar tunes like "Come Rain or Come Shine," "Love for Sale," and "All the Things You Are."

A big thank you to Buster @ Big 10 Inch Record Blog for active link.

A big thank you to Giyullia G @ Silky Denims for original link.

A big thank you to you!