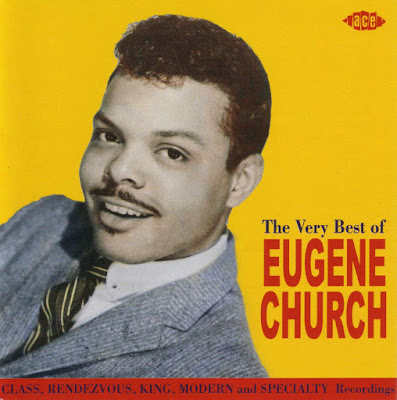 Eugene R. Church was born in St. Louis, but was raised in Los Angeles, where his father was pastor at a church at 5th Avenue and West Adams. Around 1955, Eugene became friends with Jesse Belvin, who already had released several records on different
labels. Jesse showed him the finer points of vocal harmony and songwriting. The duo first recorded together in 1956, under the name The Cliques ("Girl In My Dreams", Modern 987).

After a solo single for Specialty in 1957 ("Open Up Your Heart"), Church sang background vocals on such Belvin recordings as "Beware" and "Deacon Dan Tucker". The latter song was the inspiration for Eugene's biggest hit, "Pretty Girls Everywhere", which made the Top 40 (# 36) in 1959. Church claims that the late Tommy "Buster" Williams, another member of Jesse Belvin's inner circle, inspired the song when they were out driving around in Church's car.

"There were these pretty women walking up and down the sidewalk, and Buster said, 'Man, look at this, pretty girls everywhere!' I knew right then we had a song title." "Pretty Girls Everywhere" (also a # 6 R&B hit) was his first record for Leon Rene's Class label. Originally intended for Bobby Day, who was not interested, it was credited to "Eugene Church and the Fellows", though the background singers also included the female group The Dreamers. 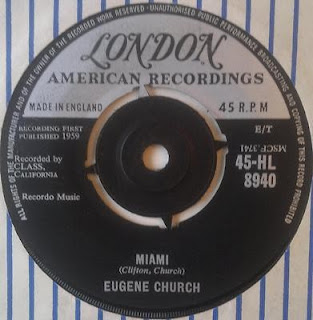 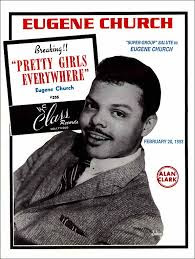 had inexplicably withheld "Pretty Girls Everywhere" from the UK public. After two more singles for Class and one for Rendezvous (a label also co-owned by Leon Rene), Church moved to the King label in 1961.

The first King single, "Mind Your Own Business" (still with involvement from Messrs Hall, Johnson and Palmer) peaked at # 19 on the R&B charts, but it was to be Eugene's last chart entry. Four further King singles followed in quick succession, produced by Johnny Otis, but sales were very limited. 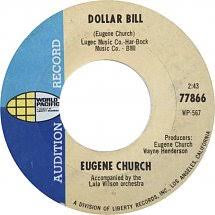 By 1963, Church (who had relocated to Texas) was ready to join the ministry. Over the next four years he sang nothing but gospel music. In 1967 he recorded one last single ("Dollar Bill") for the World Pacific label, before embarking on a study to become a beautician. Eugene opened his own beauty parlour, from which he made much more money than he had ever seen as a recording artist.

Still, the attraction of the entertainment business had never disappeared completely, and in the early 1990s, Church returned to Los Angeles, went back to secular music and toured the oldies circuit, which also brought him to Britain. But before he could make a real comeback, Eugene Church died of cancer on April 16, 1993, aged 55. As an innocent victim of the insidious Aids virus, he never lived to see a compilation of his work on either vinyl or CD.

(Compiled and edited mainly from the liner notes of  The Very Best Of Eugene Church by Stuart Colman.)

For “The Very Best Of Eugene Church” go here:

Incredibly, this is the very first album by Eugene Church, the epitome of cool West Coast R&B. We feature his four singles for the great Class label including the Hot 100 hits: 'Pretty Girls Everywhere' ('36 in 1958) and 'Miami' (#67 in 1959). Also the one single for Rendezvous and an unissued take of' 'Miami', all produced by Leon Rene. Included are Church's five King singles, which are almost unknown even though produced by Johnny Otis.
There was one R&B hit for King, 'Mind Your Own Business' (#19 in 1961). The compilation is rounded off by Church's earlier recordings for Specialty and Modern (as the Cliques duo with Jesse Belvin, including the #45 pop hit 'Girl In My Dreams' from 1956). Will appeal to the many fans of classic R&B, Rock'n'Roll and Doo Wop.

This compilation may have taken a long time in coming but it serves as a fitting tribute to a man who, whilst his time in the limelight was all too brief, gave us a great body of work.

A big thank you to The Rockin’ Bandit for original post.

Oh boy, oh boyyy! I remember bopping to Pretty Girls like it was yesterday. All of us kids were crazy about his music but it's funny, we listened on the radio but not one of us had an album by him. I am SO happy to see this and can't wait to listen. In fact, think I'll put on my now dry rotted boppin' shoes. Thank you!