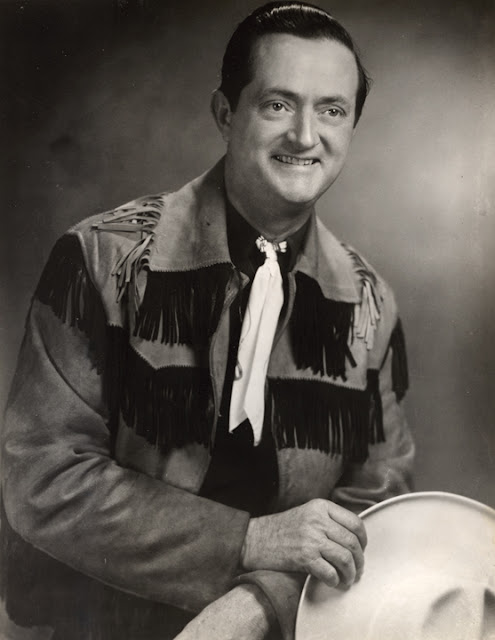 Al Dexter (May 4, 1905 in Jacksonville, Texas - January 28, 1984 in Lewisville, Texas) was an American country musician and songwriter. He is best known for "Pistol Packin' Mama", a 1942 hit that was one of the most popular recordings of the World War II years and would later become a hit again with a cover by Bing Crosby and The Andrews Sisters. 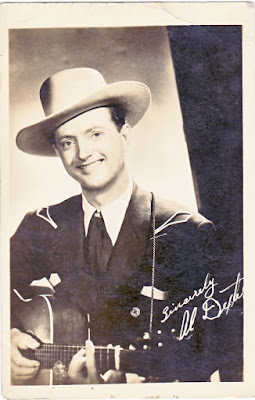 Born Clarence Albert Poindexter in Jacksonville, TX, on May 4, 1902, Dexter began playing square dances around oil-rich eastern Texas during the 1920s. The Depression forced him to work as a house painter, but Dexter began moonlighting after he formed the Texas Troopers in the early '30s. .(Speaking about the turning point in his career coming when he was in Dallas, starting to make the rounds trying to get recorded) "An old man peered over his glasses and asked me what kind of music I played. I told him Jimmie Rodgers and others. He looked at me and said, 'Son, Jimmie Rodgers is under contract. If you want to sing, sing your own songs. " 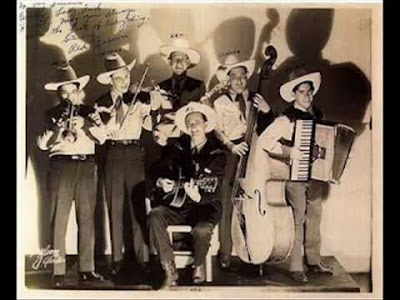 The group recorded for Okeh and Vocalion during the rest of the '30s and into the '40s. In 1944 -- the first year when charts can be accurately predicted -- Dexter scored four number ones on the country chart. "Pistol Packin' Mama" was re-released on the B-side of "Rosalita," and both songs hit number one in January 1944. His biggest hit of the year came in March, though, when "So Long Pal" spent 13 weeks at number one on the country chart -- its B-side, "Too Late to Worry, Too Blue to Cry," stayed at the top for two weeks. 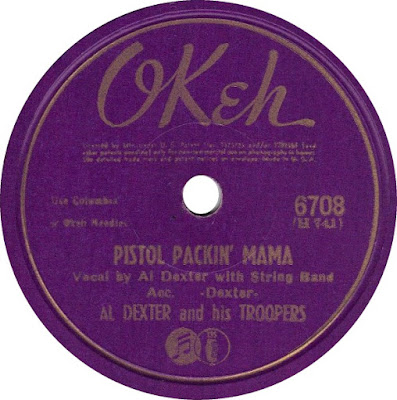 Inspiration for "Pistol Packin' Mama" came from a waitress in a roadhouse Dexter owned in the East Texas oilfields (song was written partly on a paper napkin); she was chased through a barbed wire fence by the gun-toting wife of the man she was seeing. 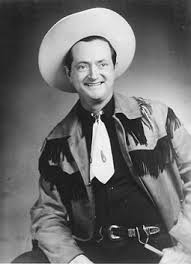 Al Dexter earned a spot in the popular music canon when he wrote "Pistol Packin' Mama" in 1942. Recorded by him a year later, the single sold three million copies -- not counting sheet music -- in less than two years and was ranked the third most popular song of the war years. Both Bing Crosby (with the Andrews Sisters) and Frank Sinatra recorded "Pistol Packin' Mama" for hits, and the song influenced country's pop-influenced Nashville sound of the '50s.


It's difficult to believe, but Dexter also managed to influence the honky tonk style that later proved a vivid counterpoint to the Nashville sound. He owned a bar for a time during the '30s and popularized the term honky tonk -- slang for both rowdy bars and later the music that emerged from their jukeboxes -- on his 1937 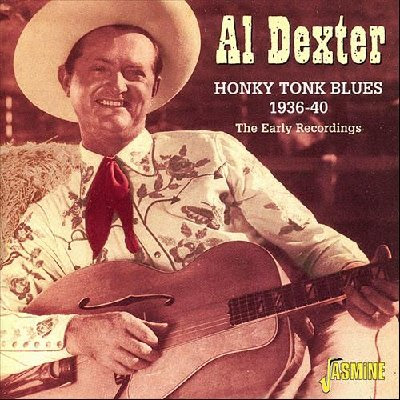 recording "Honky Tonk Blues." However, the popular theory that Dexter actually coined the term can be blown full of holes; he had never heard of honky tonk before his songwriting partner James B. Paris suggested it as a title in 1936.


The last of the war years were also successful for Dexter: "I'm Losing My Mind Over You"/"I'll Wait for You Dear," hit number one and number two respectively in January 1945, with the former spending seven weeks at number one. His second double-sided hit of the year, "Triflin' Gal"/"I'm Lost Without You," both hit the Top Five in August. In February 1946, Dexter's "Guitar Polka" spent almost four months at number one; it was his biggest 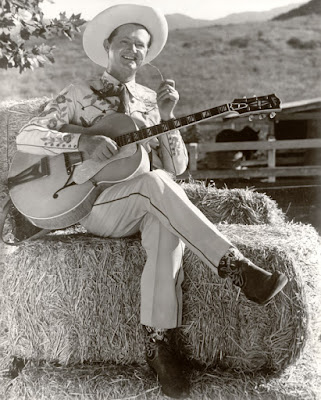 country hit and managed the Top 20 on the pop charts (also producing the number two B-side "Honey Do You Think It's Wrong"). After "Wine, Women and Song" also hit number one later in 1946, Dexter recorded three more Top Five singles during 1946-1947, "It's Up to You," "Kokomo Island," and "Down at the Roadside Inn." His final chart singles were the 1948 Top 15 singles "Rock and Rye Rag" and "Calico Rag."


All told, Dexter received 12 gold records for million-sellers in the five-year period from 1943 to 1948. He won an Oscar for "Guitar Polka" and was voted the Leading Artist of 1946 by the Jukebox Operators Association. In the late '40s, Dexter opened his own club in Dallas; he performed there until his retirement. 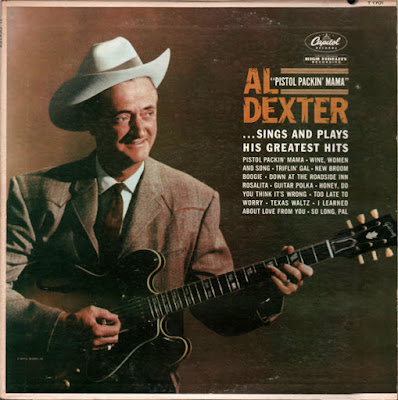 He had invested in savings and loan, motel, and real estate business in Texas and died a wealthy man. On Jan 28, 1984, Dexter died from a heart attack at his home on Lake Lewisville in Lewisville, Texas.
Dexter was inducted into the Nashville Songwriters Hall of Fame in 1971. (info mainly All Music Guide)

Once again, love the music and the comments. Thank you Bob.