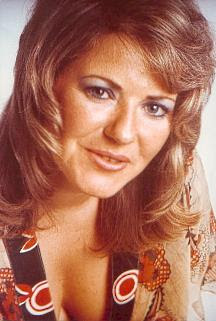 Jackie Lee (born Jacqueline Norah Flood, 29 May 1936, Clontarf, Dublin, Ireland) is an Irish popular music singer, who has recorded under various names.
Lee was a musical child prodigy. She won a scholarship and trained as a soprano for four years. Upon finishing her studies she became a vocalist with the top show-bands playing prestigious Irish venues. 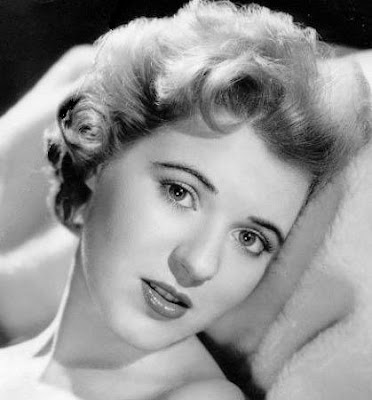 Lee experienced similar success when she moved to London and joined the popular dance band The Squadronaires. In 1955 her first solo record was released, followed by a further two the next year. On Sunday 26th May 1956, Jackie appeared as a solo singer on ATV's 'Sunday Night at the London Palladium' with Max Bygraves, whom she had previously met on a BBC radio programme.


Jackie gained further experience performing in Cyprus, Tripoli and Germany for the British Forces, along with Ronnie Hilton. By this time Jackie had met a gentleman in a Tin Pan Alley office who was 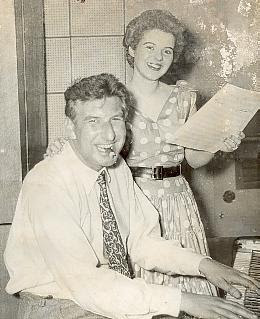 to have a decisive influence on much of her career, and also her personal life.  Len Beadle became not only Jackie's manager, but also her husband.  Towards the end of the decade, under Len's guidance, Jackie moved away from dance-bands to concentrate on building a recording career.


From 1959 to 1964, Lee was a member of The Raindrops,(with husband Len Beadle, Vince Hilland and Johnny Worth) a successful quartet who made countless appearances on British TV and variety shows, had a BBC Radio show and released a string of records, the majority of which had Lee as lead vocalist. The Raindrops recorded their debut single Along came Jones  for Parlophone (EMI) and developed their close harmony sound through a series of 45s for Oriole which included UK versions of 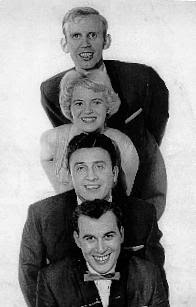 the American Billboard hits Will you love me tomorrow (originally by the Shirelles), A letter from Anne (the Videls), Party lights (Claudine Clark), and The locomotion (Little Eva).


In 1962, she entered the UK heats of the Eurovision Song Contest as a solo act with "There's No-one in the Whole Wide World" and performed it at the British national finals for BBC TV. This number was later covered and performed by The Beatles in concerts during this period. Lee decided to become a solo artist in 1965 and recorded 'beat' records until 1967. One of these releases, "Just Like a Man", reached the NME chart. The B-side; "I Gotta Be With You", were in the Northern soul idiom. Lee recorded this single under the name of 'Emma Reade' for EMI.


Lee also had an alternative career as a respected session singer, 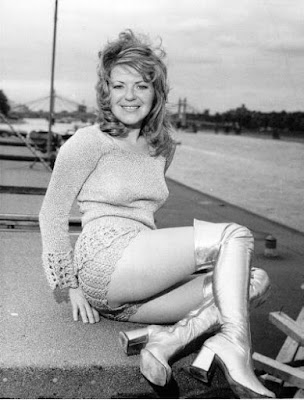 through her groups The Jackie Lee Singers and Tears of Joy. She provided the backing vocals for such global number ones as "Green Green Grass of Home" by Tom Jones and "Release Me" by Englebert Humperdink. She demonstrated her unique vocal range, ability and versatility on such diverse recordings as "Hey Joe" by Jimi Hendrix; and much of the James Last catalogue at the time. At one point Elton John was employed by Lee, as a member of her session singers. In addition she also sang various songs for film soundtracks. Among them "Born To Lose" from the film Robbery (1967), "Love Is Now" from the Norman J. Warren film Loving Feeling (1969), and the title song to the horror film Goodbye Gemini (1970). 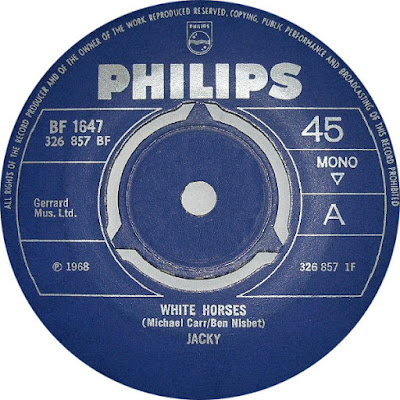 In 1968, as 'Jacky', she had a UK Top Ten hit single with "White Horses", the theme from a Children's TV programme. In 2003, her definitive version was voted the best TV theme tune of all time by The Penguin Television Companion. Her jazz-styled album of the same name was also released in 1968, which included contributions from Dudley Moore as pianist. 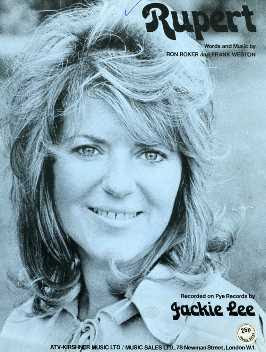 "Rupert" from the TV show based on the famous cartoon character, Rupert Bear (inaccurately referred to as "Rupert the Bear" in the song's lyrics). This recording also had a place in the "Best TV themes of all time" list from The Penguin Television Companion at Number 7, thus consolidating Lee's reputation. A tie-in album, "Jackie's Junior Choice", was released on Pye Records (PKL 5503) in 1971, followed by the similar, "Rupert and Other Junior Favourites" on Pye's budget Golden Guinea label (GSGL 10492) in 1973, which also included Jackie's recording of another children's series, "Inigo Pipkin". 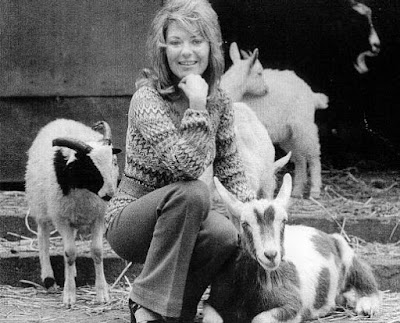 It was shortly after this that she prematurely retired owing to vocal complications and throat trouble. With her musical career never having reached the heights it deserved, Jackie sadly bade farewell to the music industry in 1973.  She later moved to the United States, and subsequently Canada, where she now lives, happily married, far away from the world of entertainment. (Info edited from Wikipedia & jackielee.org)

Here’s Jackie's mythological EMI repertoire from the legendary Abbey Road Studios. Featuring all of the Jackie Lee / Emma Rede Columbia 45s, which of course includes the massive Mod/Soul club favorite 'I Gotta Be with You'. Included are previously un-issued alternative takes and many songs which have only existed as EMI DISCS UNTIL NOW! There's even the famous duet performed with (Sir) Cliff Richard 'If Our Dreams Came True' from the Cliff Richard & the Shadows 1967 LP "Cinderella”

A big thank you to Peter @ Loadsamusics Forum for original link.

Thanks Jake And another big thank you to Peter who has come up trumps.

For “Jackie Lee - End Of A Rainbow: A Pye Anthology “ go here:

For back CD art work go here and click on front cover then back cover will appear:

“Jackie Lee - End Of A Rainbow: A Pye Anthology “

Could you please re-up the link for this album as the current link is now dead.

Sorry for the long delay, but It's taken me ages to find it. If you still want a re-up let me know and I will post A.S.A.P.