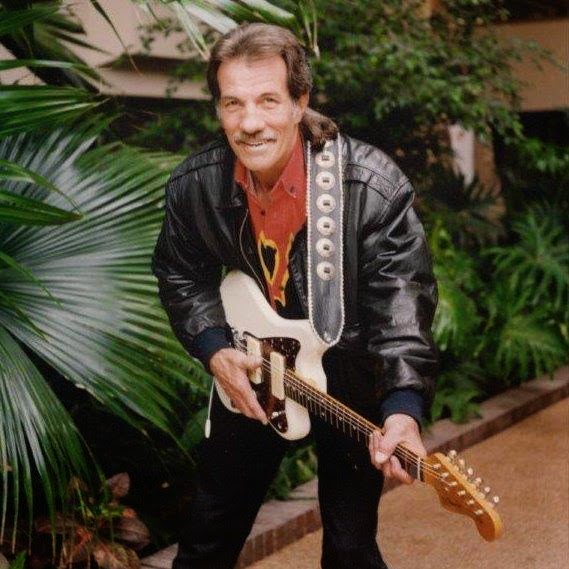 George Anthony Tomsco (born April 24, 1940) was one of the most popular and influential instrumentalists of Tex-Mex styled rock music. As one of the founding members of the Fireballs, George is a true rock & roll pioneer. In the late ‘50s and ‘60s, his guitar playing was ubiquitous on the radio waves with hits as “Torquay,” “Bulldog,” “Sugar Shack” and “Quite a Party.” 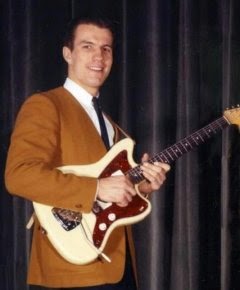 He was born and raised in Raton, New Mexico and has one sister, Alberta. His father ran a Conoco service station and he worked there part time when he was a teenager. Tomsco was always interested in music and in 1957, while still in high school; he started a rock and roll band “The Fireballs.” They never had music lessons; all the band members learned by ear. The Fireballs had a unique, popular sound, and they performed in the Raton High School to standing ovations. The original 1958 line-up was: George Tomsco (lead guitar), Chuck Tharp (vocals), Stan Lark (bass), Eric Budd (drums), and Dan Trammell (rhythm guitar). 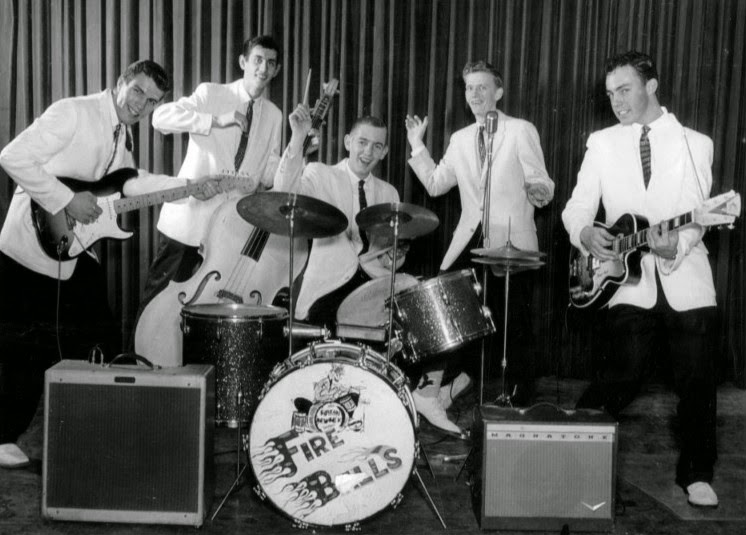 The Fireballs. The photo was taken as the group had just started to become known and had recently been signed to a contract with Kapp Records. From left: George Tomsco, Stan Lark, Eric Budd, Don Trammel, and Chuck Tharp.

After high school, Tomsco attended the New Mexico Institute of Mining and Technology in Socorro. He really wasn’t interested in school because he had always wanted to be a musician but didn’t know how to get into the business. The Fireballs continued to play on weekends in local clubs. One day someone heard him playing a home recorded acetate and remarked that the band should record their music. They auditioned for Norman Petty who owned a famous recording studio in Clovis, New Mexico. Petty liked their 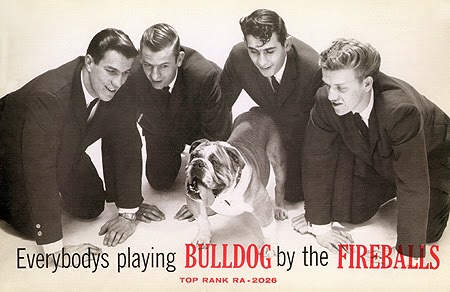 style and this started their career. In 1959 the Fireballs recorded their first release, Petty negotiated a contract for the group and they never looked back.


In addition to playing with the Fireballs, Tomsco played on numerous sessions in the late '50s and 1960s. Although he was most frequently heard as a session player on instrumental records that bore some similarity to those of the Fireballs, or with vocalists who were trying to imitate Holly, he was versatile enough to also contribute to sides by folksinger Carolyn Hester and soul artist Arthur Alexander. 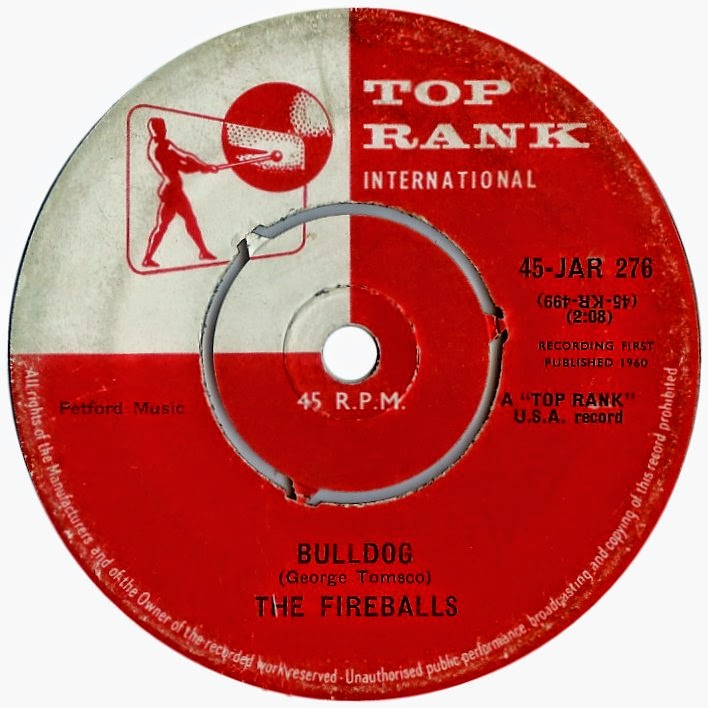 George Tomsco's nimble guitar work was influenced by rockabilly, country & western, and Latin music. Although few fans would recognize his name, he was one of the most popular and influential instrumentalists of Tex-Mex styled rock music, finding particular favour in Britain with the Shadows, who covered some Fireballs 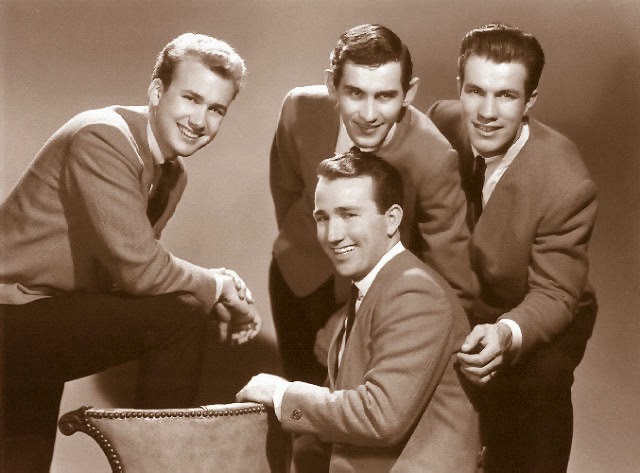 songs.
In 1960 the Fireballs appeared on the Dick Clark Show and American Bandstand. Tomsco said that meeting Dick Clark was a great experience and this really helped their career. They recorded many albums in the next several years.
In 1963 they brought singer Jimmy Gilmer into the group and recorded “Sugar Shack.” This became the number one hit for five weeks and was the largest selling single that year and is perhaps their most well-known song. 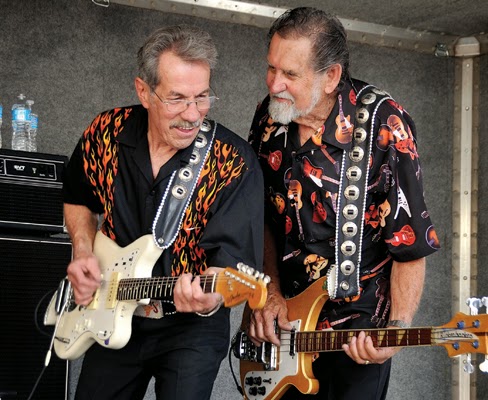 By 1972, Gilmer and Lark had left the Fireballs, leaving Tomsco to carry on with just his guitar and replacement players. He sold insurance for a few years; Lark did technical work for local coal mines. When original singer Chuck Tharp rejoined Tomsco in 1989, Lark followed. The three original Fireballs performed from 1990 until Tharp’s death, in 2006.
In 1989 the Fireballs were inducted into the Norman Petty Walk of Fame and in 2001 they were inducted into the West Texas Rock and Roll Walk of Fame. Tomsco was introduced to the Huerfano Community Bible Church in Walsenburg through his sister Alberta. He joined the church band called Standfast. This band provides music at church and other functions around Walsenburg. 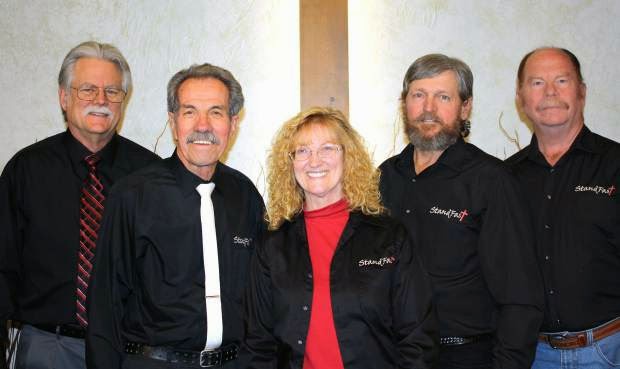 From left: Rick Dunn, George Tomsco, Carol Dunn, Lee Adams and Bruce Stevenson of the praise band StandFast.
Tomsco and Lark still played a handful of Fireballs concerts around the country for a few years and Jimmy Gilmer, today an artists’ manager in Nashville, joined them for a couple of shows. At present the Fireballs is in a state of “neutral/ idle,” according to Tomsco.
“I still perform as a guest guitarist with other bands in the U.S., England, Canada and Spain as George Tomsco of the Fireballs, playing instrumentals and vocal recordings from more than 50 years ago.” 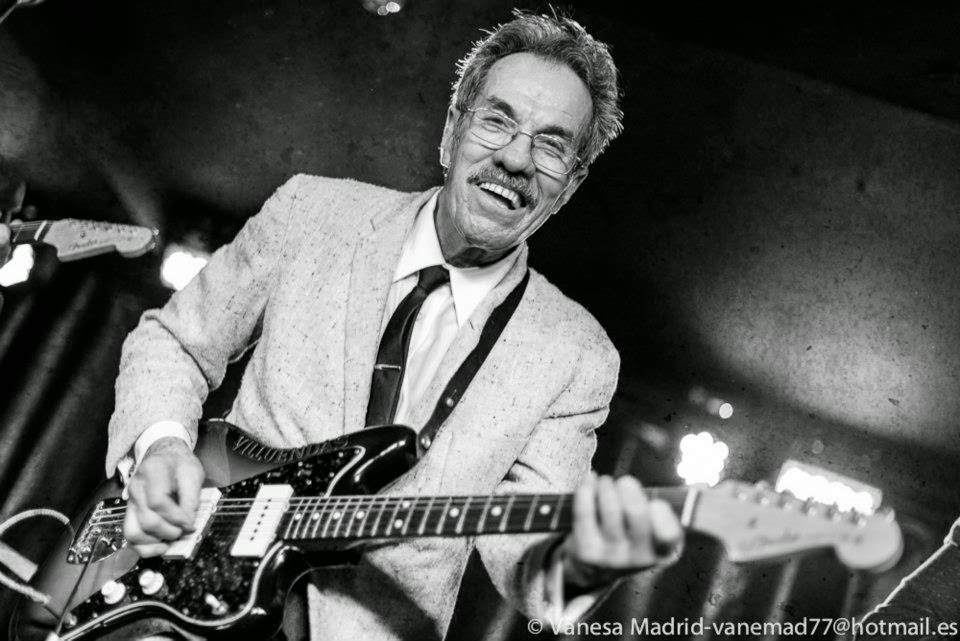 George Tomsco didn't record on his own often, but a 30-song anthology consisting mostly of tracks he did with the Fireballs and as a session musician, The Tex-Mex Fireball album, was issued under his name in 1998.
(Info edited from All Music & World Journal Huerfano)

Enjoyed your blog on George Tomsco and the Fireballs. The Shadows must have been influenced by them as you mentioned, and there are similarities in the style of play and presentation. Well done Bob