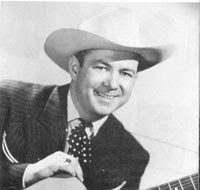 Mervin James Shiner (February 20th, 1921 (Bethlehem, Pennsylvania) is a Country singer and guitar player (mostly Honky-Tonk style). Like so many talented country performers, Shiner never got the breaks to make the big time. 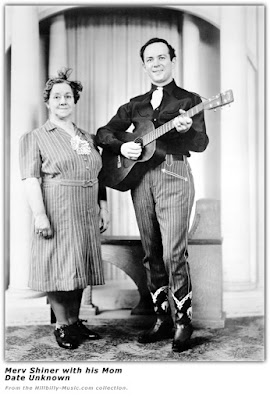 Martin guitars have held a special place in Merv's heart ever since his father bought him his first one in 1937. What a sacrifice it was in the middle of the Depression for Merv's father to purchase his 16-year-old son a Martin guitar for $37.50 so he could pursue his dreams of being a musician. He and his mom began singing on the radio every Sunday night out of WEST in Easton. The duo known as "Mervin Shiner and his Mother" sang country and gospel songs for the program "Western Roundup." The mother and son duo soon gained widespread popularity in Pennsyvania . 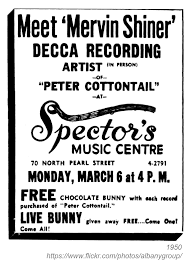 For a period during high school, Mervin hitchhiked to Easton once a week to perform an additional 15-minute program by himself. Back then, country was considered 'hick' and known as hillbilly music. Following his high school graduation Mervin headed for Hollywood, intent upon continuing his career in the entertainment world. He sang and played in several shows then moved back east where he remained busy singing weekly radio spots on WEST and WSAN in Allentown. He even became a part of a local cowboy band, the Circle J. Range Riders from Quakertown. Mervin
recalled. The Range Riders played with Roy Rogers and was the Dorney Park house band. 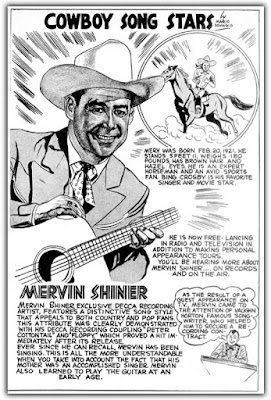 After a successful audition in 1949, Mervin and his mother sang on a television program called the "Hometown Frolic" out of WATV in Newark, N.J. As a result Mervin came to the attention of Vaughn Horton, a famous songwriter, who helped the young singer secure a Decca recording contract. His songs made the Top 10, including "Why Don't You Haul Off and Love Me," "Little Liza Lou," "Anticipation Blues," "An Old Christmas Card," "I Overlooked an Orchid" and "If You've Got the Money, I've Got the Time." Some fans called him "the singer with a tear in his voice," perhaps a trait he gained from his mother's advice that he should always, "Sing the way the song makes you feel." 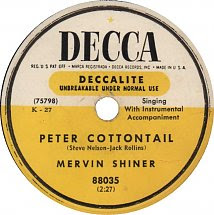 But it was the children’s song “Peter Cottontail” that really opened all the doors for Mervin. "Peter Cottontail" was hoppin' on the airwaves by Easter 1950 and Mervin soon was singing the Opry with Hank Williams and Minnie Pearl and went on to sing with or 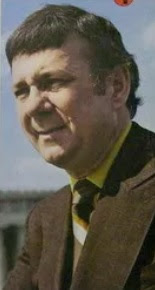 After recording "Cottontail," Shiner went on to become immensely popular below the Mason-Dixon line as a standard on the Nashville circuit. Much of his career was spent touring the United States and living in Nashville. Shiner has recorded with the famous gospel quartet, the Jordanaires, and was even the star attraction of the Camel Caravan. He recorded for various labeles throughout his career including Coral, RCA Victor, Coffee House, MGM, Little Darlin' and Cetron and used the name Mervin, Merv or Murv Shiner.

During the 70’s Shiner lived in Tampa, Florida and worked booking bands until he "retired". He stopped performing regularly in 2004 but during 2014 at the age of 93 he performed most of his favourite songs at a Homecoming Anniversary concert in Bethlehem captivating his audience with precious memories and anecdotal stories which he weaved throughout his 18-song set. With a musical career that has spanned more than seven decades, much of it spent in Nashville, he had lots to draw from. 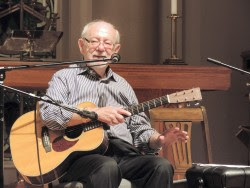 As of 2016 Shiner was still singing and playing his Martin Guitar.

Well music lovers I managed to find four tracks from various cd’s, but the rest are from the good old Internet Archive. So a big thank you to all the original up-loaders and a big than you to Les for directions.

SO FOR “MERVIN SHINER – STEPPIN OUT (THE COLLECTION)” GO HERE:

ALL IN ORDER OF RECORDING DATES

PLEASE NOTE ARTWORK IS PURELY FOR ILLUSTRATIVE PURPOSES ONLY AND NOT CONTAINING CONTENTS OF THE B.A.C.M. ALBUM (WHICH I'M LOOKING FOR)

You have given me much music and education over the years, for which I thank you. Now I can offer a small token of repayment. Here is a seven-day link for Shriner album you are looking for. https://we.tl/t-2Ioj9xkDH8

You’ll find a few here not on my humble compilation and at a better bit rate too!

Thanks Bob. Another new singer I'd never heard of. Great songs.