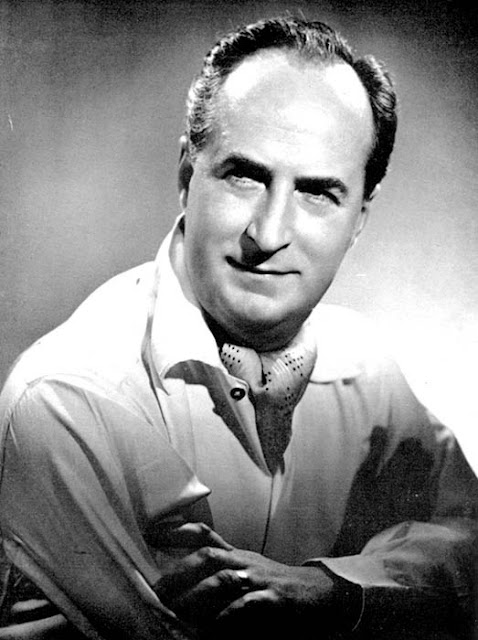 George Melachrino (born George Miltiades; 1 May 1909 – 18 June 1965) was a musician, movie composer, and musical director who was English born of Greek and Italian descent. He was an accomplished player of the violin, viola, oboe, clarinet and saxophone and was one of the most popular arranger/conductors of the so-called "Golden Age of Mood Music.” 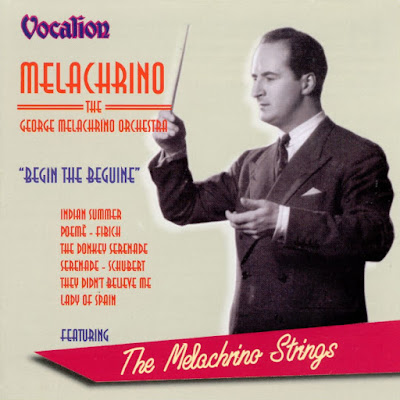 He was born George Miltiades Melachrino In Albany Street, London. His father was a Greek cigarette manufacturer, and his mother came from Worcestershire. At the age of four he was being taught by his stepfather on a minature violin, and was only 13 when he made his first public appearance as a solo violinist. Three years later he enrolled at the Trinity College of Music, winning praise for his work with strings. He mastered all the instruments in the orchestra except the piano and the harp.


He discovered his talents were well suited to the demands of the British dance bands which flourished during his youth. While still in his teens, as early as 1926 he was recording with Geoffrey Gelder & His Kettner's Five, and in following years was singing and playing at the Savoy Hill Studios in London. 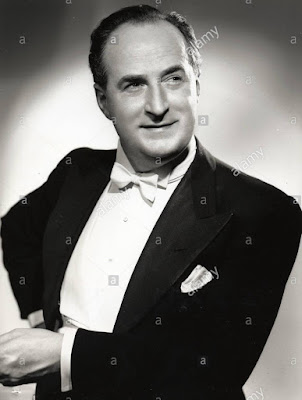 For the next twelve years, he played in many different bands and orchestras such as  Ambrose, Harry Hudson, Jack Jackson, Van Phillips, Rudy Starita, Jay Wibur, Maurius B.Winter and Carroll Gibbons, who made him a star vocalist. His duets with Anne Lenner were especially popular. By 1938 he was getting star billing for his BBC broadcasts, and in 1939 he was leader of the dance orchestra at London's Cafe de Paris.

He joined the Army a year later, and received training at the Corps of Military Police where he became a P.T. Instructor. Melachrino also gained experience as a military musician, at the Army Broadcasting Department, as Musical Director for the recording of entertainment for overseas forces, leading the British Band of the Allied Expeditionary Forces and the Orchestra Khaki. After the war his AEF band formed the backbone of the magnificent George Melachrino Orchestra, an 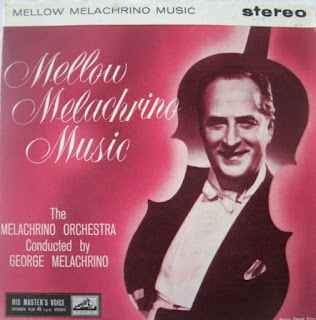 orchestra that became synonymous with sweet and melodious music and was to achieve world-wide fame for almost 20 years.


Fom 1945-1947 he conducted for Richard Tauber in most of his Parlophone recordings and BBC broadcasts. His post-war orchestra made around 100 78rpm recordings and more than 50 LP's. Thanks to the long playing record, his fame spread throughout the world, especially in North America where his albums sold millions of copies.


Out of all of his albums -- which were frequently hits -- the most notable were his Music for Moods series, which included such records as Music for Dining, Music to Help You Sleep, Music for Two People Alone, Music for Faith and Inner Calm, Music for Daydreaming, and Music for Relaxation, among many others. All of the Music for Moods albums were produced by Ethel Gabriel, who helped mastermind their sound and direction. Melachrino occasionally ventured beyond the limits of the most conventional easy listening styles--such as on Lisbon at Twilight, for which he enlisted Portugese guitar virtuoso Raoul Nery..


Melachrino formed a musical organization that grew to encompass recordings, concert tours, publications, and film scores. He scored a number of films in the late 1940s and early 1950s, the most popular being the British film noir "No Orchids for Miss Blandish." He also 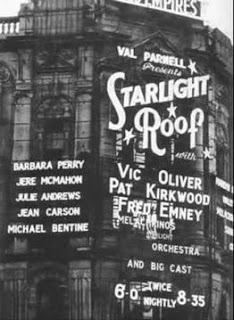 
Melachrino frequently performed on BBC and American Armed Forces Radio. He vied with Mantovani in trying to dominate the post World War II easy listening audiences. . The Starlight Roof Waltz, as performed by the George Melachrino Strings, was the signature tune of the radio programme Moeders wil is wet (1949–1974), the Dutch equivalent of Housewives' Choice. 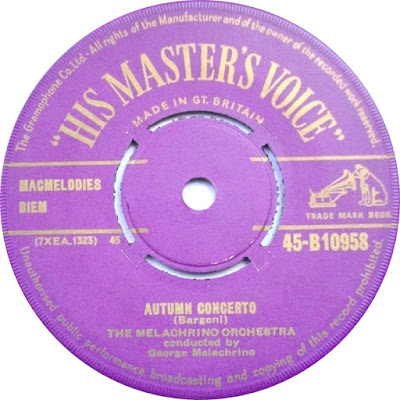 In 1956, his orchestra's track, "Autumn Concerto", reached number 18 in the UK Singles Chart, and remained in the chart for nine weeks. His lead arranger during the British Band of the AEF & later with the Melachrino Strings was Bert Thompson, who also arranged "Little White Bull" & "The Young Ones". 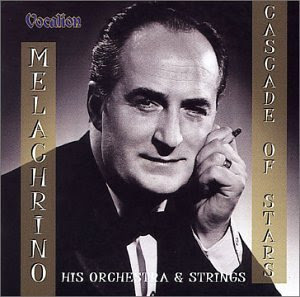 Melachrino's career was going strong into the '60s, as he began recording for ABC Paramount. Sadly George fell asleep and tragically drowned in his bath at his London home 18 June 1965, age 56. Today it is his recordings which serve to remind us of his exceptional talent. Melachrino has a star on the Hollywood Walk of Fame.  He was still successful at the time of his death, and the Melachrino Strings and Orchestra continued without him under the direction of Robert Mandell who continued to record into the late 1970s.


(Compiled and edited from Wikipedia, Spaceagepop and an article by David Ades 2003)

For “The Best Of The Melanchrino Strings” go here:

A big thank you to the Easy and Wonderful blog for original post.