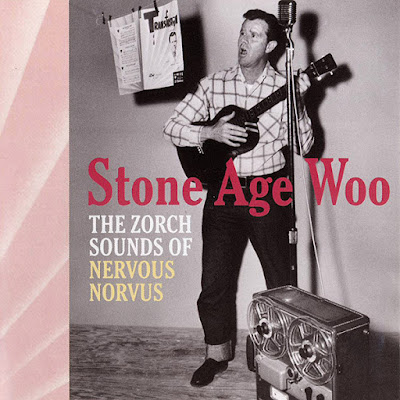 Jimmy was born in Memphis, and lived for a few years in Ripley, Tennessee, near the Arkansas border.  A chronic asthma condition led Drake's family to move him to California when he was seven, first to the Bay Area, then soon afterwards settling in Los Angeles. Like everyone else, the Drakes suffered hard through the Depression. 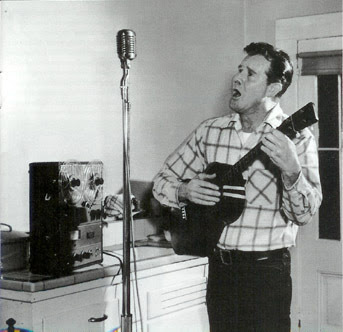 He served a year-long hitch with the Civilian Conservation Corps, a New Deal program charged with make-work tasks such as forest maintenance and then spent the pre-War years hoboing around the country. He moved back to the Bay Area in 1941, settling, finally, in Oakland, in a modest house on West Grand which he would occupy for the rest of his life. He got married the following year, although little is known about his wife. A heart condition kept Drake out of the military; he spent the War years working in shipyards instead. At some point after the War he took a job as a truck driver, the occupation that would sustain him until the success of "Transfusion."

In 1951 Drake began writing novelty songs of his own, starting with "Little Cowboy." It was followed by "The Heart Mender" and "The Kangaroo Hop," the latter a preliminary version of "The Bullfrog Hop," one of the Dot singles. By 1953, the 41-year-old truck-driver was fishing around for a way to get off the roads, and set his sights on a career as a songwriter. His first move was to buy a reel-to-reel tape recorder and a cheap second-hand piano.

Next, he signed up for a correspondence course in musical notation. "There were 96 lessons," he said in the Tribune interview. "I learned to read music in the first ten and quit. I haven't looked at the other 86." He then bought his king-sized uke, more properly known as a baritone ukulele. 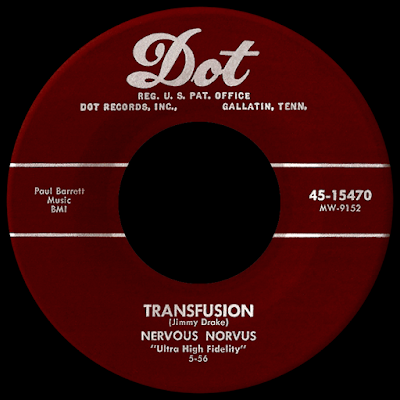 As Nervous Norvus his novelty song "Transfusion" was a Top 20 hit in 1956, reaching No. 13 on Billboard's Hot 100 Chart. A second song, "Ape Call," released later that year, also charted and peaked at #28. The song was banned on many radio stations in the 1950s. The song was later played on the radio by DJ Barry Hansen, 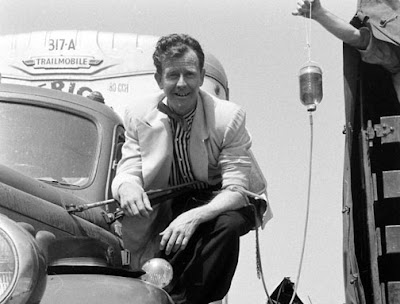 which reportedly led to Hansen's eventual nickname of Dr. Demento. The car crash sound effect from this song, dubbed from the Standard Sound Effects Library, can be heard on "Dead Man's Curve" by Jan and Dean and "Leader of the Pack" by the Shangri-Las, and is currently available on the "Classic TV Sound Effects Library" from Sound Ideas.


Nervous Norvus was over 40 by the time he had his two hit singles in 1956. His records were made with input from radio personality Red Blanchard, to whom he was sending demos in the hope of 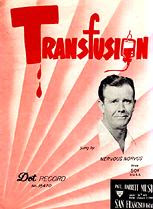 finding an artist to record them. Blanchard had been an influence, particularly with the "jive" language employed in the lyrics. After his brief time of glory, which amounted to less than six months, he concentrated on his demo service, providing music for other people's songs. He would charge around seven dollars to make these demos, some of which led to publishing contracts for the songwriters.


He was very shy and even turned down a chance to perform "Transfusion" on The Ed Sullivan Show. After a final single on Dot Records ("The Fang" b/w "Bullfrog Hop"), the artist had his contract dropped. He only recorded sporadically thereafter for a series of small independent labels like Embee ("Stoneage Woo" b/w "I Like Girls" - 1959) and Big Ben ("Does a Chinese Chicken 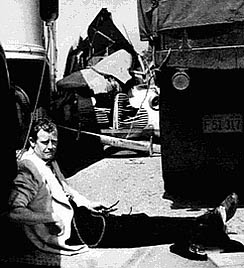 
Details of Drake's waning years are murky, and at present can be but speculated about. It is not known, for instance, for how long he continued his demo business, but a clue is that by the early '60s his once-frequent ads in the tipsheets had gradually wound to a halt. Drake sought solace in alcohol just a tad too much. On July 24, 1968, Jimmy Drake died, age 56, in an Alameda County hospital, of cirrhosis of the liver. His body was donated to the University of California Anatomy Department.

(Edited from Wikipedia and an article by Phil Milstein @ songpoemmusic.com)

Norton's Stone Age Woo: The Zorch Sounds of Nervous Norvus is a long-overdue collection of the novelty songs and song-poem demos of "Singing" Jimmy Drake, whose wilder moments were ascribed to Nervous Norvus. The album features not only his best-known songs, the "Dot Six" (including the million-selling novelty classic "Transfusion"), but many, many other songs, including some that existed only as single-copy or small-pressing acetates.

Most of the collection is '50s through and through, from song subjects like sci-fi creatures, dance crazes, and daddy-os to tracks like the gleeful "Elvis You're a G.I. Now." These glancing references to the world of pop culture make Drake's work that much more surreal, especially considering the fact that he was well into his forties by the time he stumbled into being a novelty songwriter. Drake's day job during this time was recording demos of songs by amateur lyricists, some of which are also included on Stone Age Woo. "I Like Girls," for example, could almost pass for innocuous '50s pop, were it not for Drake's charmingly creepy vocals, kissing noises, and a harpsichord and banjo breakdown.

Though this is a generous collection at 33 songs long, it's just a drop in the bucket compared to Drake's overall recording career, which numbered into the thousands of versions of other peoples' songs. In some ways, Nervous Norvus could be seen as Drake's very creative way of blowing off steam about work. A thorough -- and thoroughly entertaining -- set, Stone Age Woo is a must for anyone with a serious interest in one of the best performers of highly unserious music. (Edited AllMusic Review by Heather Phares)

thank u 4 this music - Aussie