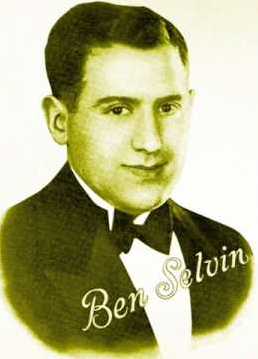 Benjamin Bernard Selvin (March 5, 1898 – July 15, 1980) was an American musician, bandleader, and record producer. He was known as the Dean of Recorded Music. 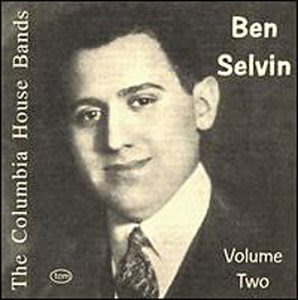 Selvin was the son of Jewish Russian immigrants. He started his professional life at age 15 as a fiddle player in New York City night clubs. Six years later, as leader of his own dance band, the Novelty Orchestra, he released the biggest-selling popular song in the first quarter-century of recorded music. "Dardanella" sold more than six million copies and an additional million pieces of sheet music. It was awarded a gold disc by the Recording Industry Association of America (RIAA) that was presented to Selvin on his retirement on March 14, 1963.


According to The Guinness Book of World Records, Selvin recorded more musical sides (on 78-rpm discs) than any other person. One reason for this prolific output is that he recorded for dozens of different record labels during this productive time in the industry, using a different name for each label. His output has been estimated at 13,000 to 20,000 song titles. Selvin started recording for Victor in 1919. He proceeded to record for almost all record companies at the time including Paramount, OKeh, Emerson, Lyric, Arto, Cardnal, Vocalion, Pathe, Federal, Brunswick, Grey Gull, Banner (and the related dime store labels), and Columbia. From 1922-1925, over half of his records were on Vocalion, but he apparently did not have an exclusive contract with any of these labels until he signed with Columbia in 1927. 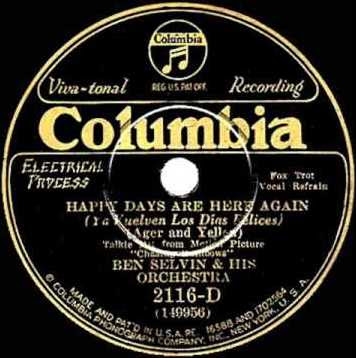 From 1927 to 1934 Selvin was artists and repertoire (A&R) director for Columbia Records, where his many productions included musicians Manny Klein, Benny Goodman, Tommy Dorsey, Jimmy Dorsey, Joe Venuti, Eddie Lang, and Bunny Berigan. Many of these recordings are collectable and prized (especially those recorded in 1931-1934). There were incorrect reports that Ben Selvin's Band played under the name "Perley Stevens and his Orchestra". Perley Stevens occasionally played with Ben Selvin's Band and many others, including Jimmy and Tommy Dorsey Orchestras and Paul Whiteman's Band. During the Columbia era, Selvin recorded under many different names for Columbia, OKeh, Odeon, Parlophone, Harmony, Diva, Velvet Tone, and Clarion.


Around 1947 Selvin worked for Majestic Records as chief of artists and repertory. He was an A&R director at RCA Victor in charge of the company's popular Camden Records label and served as the musical director for a recording in 1954 with John Serry Sr. In the early 1960s, he was forced to retire from RCA at age 65. 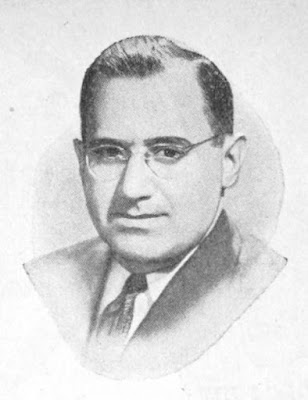 He became a consultant for 3M (Minnesota Mining and Manufacturing), a company that transferred recordings to audiotape. He recommended records to be transferred to the new tape medium. He was a vice-president and A&R director (artists and repertoire) at Columbia Records in charge of the recordings of Frank Sinatra, Doris Day, Dinah Shore and Buddy Clark in the late 1940s and early '50s.


In 1956 he served once again as musical director with Serry for another swing jazz album at Dot Records.

A big thank you to Paul Wells blog for original (.flac) post.

Thank you for sharing this .. great quality!!!