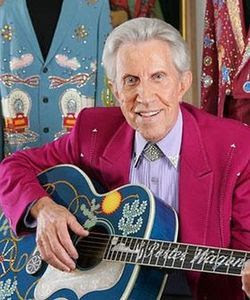 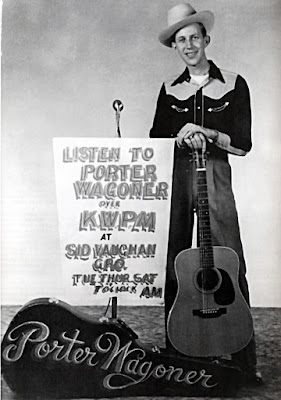 Wagoner was born in West Plains, Missouri, the son of Bertha May (née Bridges) and Charles E. Wagoner, a farmer. His first band, the Blue Ridge Boys, performed on radio station KWPM-AM from a butcher shop in his native West Plains, Missouri, where Wagoner cut meat. In 1951, he was hired by Si Siman as a performer on KWTO in Springfield, Missouri. This led to a contract with RCA Victor. He released Hank Williams' "Settin' The Woods On Fire" and had his first top 10 hit in 1954, with "Company's Comin". 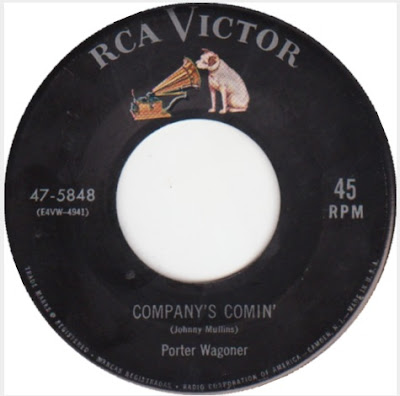 With lagging sales, Wagoner and his trio played schoolhouses for the gate proceeds; but in 1953, his song "Trademark" became a hit for Carl Smith, followed by a few hits of his own for RCA Victor. Starting in 1955, he was a featured performer on ABC-TV's Ozark
Jubilee in Springfield, Missouri. He often appeared on the show as part of the Porter Wagoner Trio with Don Warden and Speedy Haworth. Warden, on steel guitar, became Wagoner's long-time business manager. In 1957, Wagoner and Warden moved to Nashville, Tennessee, joining the Grand Ole Opry.

Like many of his contemporaries in country music, Wagoner toured and performed outdoors for fans at American Legion houses in rural towns. Fans sat on wooden benches facing what was often a makeshift stage. Wagoner would mingle with the audience during performance breaks and usually remembered the names of the towns he visited. 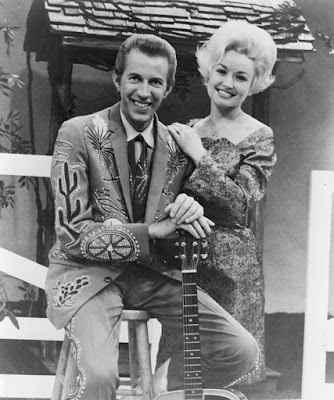 Through the 1960s, his hits, many he wrote or co-wrote,were "Carroll County Accident," "A Satisfied Mind," "Company's Comin'," "Skid Row Joe," "Misery Loves Company" and "Green Green Grass of Home. He had many hits with Dolly Parton and also won three Grammy Awards for gospel recordings.

His syndicated television program, The Porter Wagoner Show, aired from 1960 to 1981. There were 686 30-minute episodes taped; the first 104 (1960–66) in black-and-white and the remainder (1966–81) in colour. At its peak, his show was featured in over 100 markets, with an average viewership of over three million. Reruns of the program air on the rural cable network RFD-TV and its sister channel in the UK Rural TV. 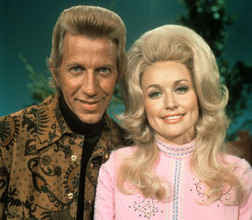 The shows usually featured opening performances by Wagoner with performances by Norma Jean, or later Parton, and comedic interludes by Speck Rhodes. The shows had a friendly, informal feel, with Wagoner trading jokes with band members (frequently during songs) and exchanging banter with Parton and Howser. In 1974, Dolly Parton's song "I Will Always Love You", written about her professional break from Wagoner, went to number one on the country music charts. 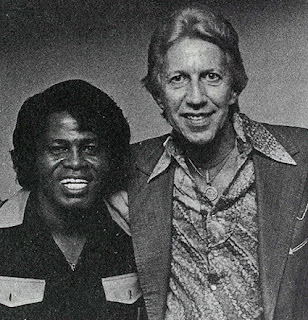 Wagoner brought James Brown to the Grand Ole Opry, produced a rhythm & blues album for Joe Simon, and appeared in the Clint Eastwood film Honkytonk Man. During the mid-1980s, Wagoner formed an all-girl group, The Right Combination, named after one of his hit records with Parton. He also hosted Opry Backstage during the 1990s on The Nashville Network. Though Parton's departure caused some animosity on both sides, the two reconciled in the late 1980s and appeared together a number of times in the following years; Parton inducted Wagoner into the Country Music Hall of Fame in 2002. 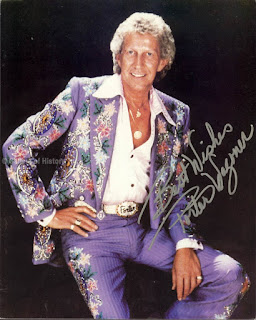 On June 5, 2007, Wagoner released his final album called Wagonmaster. The album was produced by Marty Stuart for the Anti- label. The album received the best reviews of Wagoner's career and briefly charted on the country charts; a music video was also produced of one of the tracks, a cover of Johnny Cash's "Committed to Parkview". He toured during the summer of 2007 to promote the album, including a late-July appearance on Late Show with David Letterman. 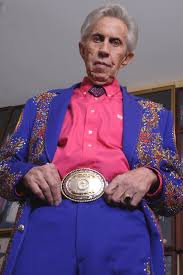 Until his final illness, Wagoner appeared regularly on the Grand Ole Opry and toured actively. He died from lung cancer in Nashville on October 28, 2007, with his family and Dolly Parton at his side. Wagoner's funeral was held November 1, 2007, at the Grand Ole Opry House. He is buried at Woodlawn Memorial Park Cemetery in Nashville. (Edited from Wikipedia)

A big thank you to Mijas @ ACM2 blog.

Porter Wagoner was a major country star between 1955 and the early 1980s charting with over 80 singles on the Billboard country bestseller list. He is also remembered today as the man who helped to launch the career of little known country songstress by the name of Dolly Parton. In fact Ms Parton never forgot her debt to Wagoner and when he died in 2007 she performed a tribute concert in his memory at her Dollywood theme park.

Herein are his first two LP releases which contain his first #1 hit singles 'A Satisfied Mind' and 'Misery Loves Company' plus 29 superb singles on disc 2.

This 2CD set is a perfect introduction to the hit laden music of Porter Wagoner and furthermore it is 53 examples of the kind of country music they just don't make anymore! (Jasmine notes)

Great collection, thanks for this and the other country and western artists Bob!

Any chance you could re-up this one? Just discovered your site which as been a lot of fun reading. Thanks for all the time you take to post informative articles.
John