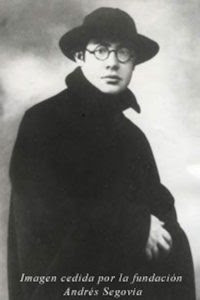 students of his students.


Andrés Segovia, Marquis of Salobreia, was born near Jaen, Granada, Spain. He became a guitarist against the double opposition of his parents. First, they opposed his learning the guitar and got him cello and piano teachers instead. When he persisted in teaching himself guitar, they opposed his becoming a musician. He sought a guitar teacher at the Granada Institute of Music when he studied there, but found none, so continued learning the instrument on his own.


He made his debut at the Centro Artística in Granada at the age of 15. He played so skilfully that he was urged to become a professional soloist. He played in Madrid in 1912, at the Paris 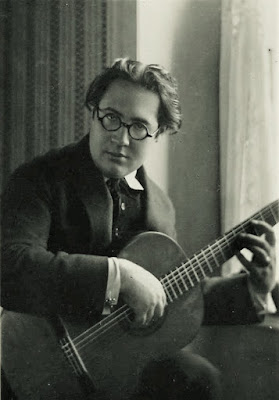 Conservatory in 1915, and in Barcelona in 1916, and made a wildly successful tour of South America in 1919. He made his formal debut in Paris on April 7, 1924, in a program which included a new work written for him by Albert Roussel, named Segovia. It was the first of many works which were written for him by distinguished composers, enriching the instrument's repertory as Segovia had elevated its artistic potential. His U.S. debut was at Town Hall, New York, on January 8, 1928.


Being self-taught, his technique was unique. It was, in fact, superior to that which was being taught at the time, and extended the flexibility and expressive possibilities of the instrument. The main difference was in the method of using the right hand for strumming and picking the strings: Segovia's method paid much attention to the means of attack: whether hard parts of the fingers, fleshy parts, or the nails were used; other subtleties that affected the 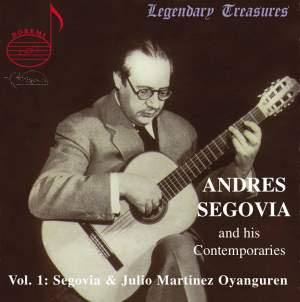 dynamics of the instrument; and an economy of motion that allowed longer and more sustained playing.
There were classical guitarists before him, and distinguished ones even when he appeared, but it was not an instrument that was regarded as a serious vehicle for classical music. Segovia personally changed that, and not by accident. No doubt affected by his parents' attitude toward his chosen career, he had a driving desire to make it so. He wrote numerous transcriptions of older music for lute and for the Spanish vihuela. He transcribed music of Bach, Haydn, Mozart, Chopin, Handel, and others. He commissioned works by Castelnuovo-Tedesco (notably the great suite Platero and I), Falla, Turina, Tansman, Villa-Lobos, Torroba, Ponce, and Rodrigo, whose Fantasia para un gentilhombre was written for him. 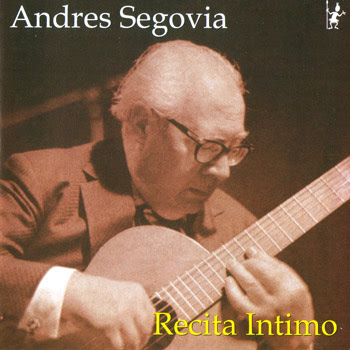 Here is " Preludio en Mi Mayor" by Ponce from above album


His reinstatement of the guitar as a solo instrument was sealed by his becoming one of the great teachers of music history. He established guitar schools or courses at the Accademia Musicale Chigiana, Siena, Santiago de Compostela, and the University of California in Berkeley. His students included Alirio Diaz, Oscar 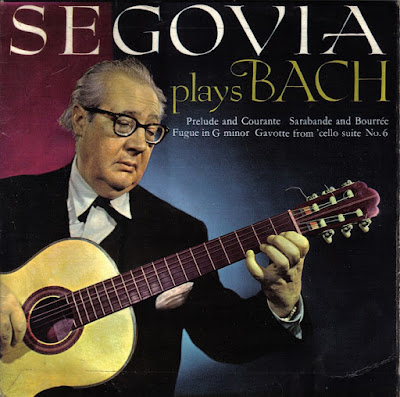 Ghilia, and John Williams.
Segovia became one of the great names in classical music, whose mere name was enough to sell out houses worldwide. He received numerous awards and honours during his lifetime, including the Grand Cross of Isabela and Alfonso, the Gold Medal of the Royal Philharmonic Society of London, and many honorary degrees. The house where he was born had a commemorative plaque attached to it in 1969 proclaiming him the "leading son of the city." King Juan Carlos of Spain ennobled him as the Marquis of Salobreia in 1981, and in the same year a Segovia International Guitar Competition was established in his honour. He continued to give recitals and concerts until an advanced age, and had the rare opportunity, in 1984, of playing at a gala concert honouring the 75th anniversary of his professional debut. 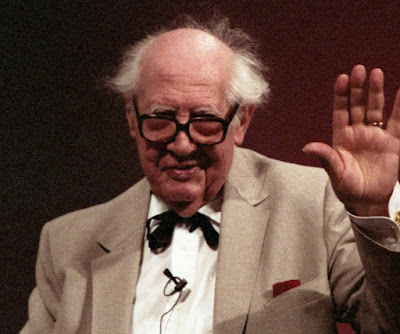 He died in Madrid of a heart attack  June 2, 1987, at the age of 94. He is buried at Casa Museo de Linares, in Andalusia.  (Mainly edited from an All Music bio by Joseph Stevenson)