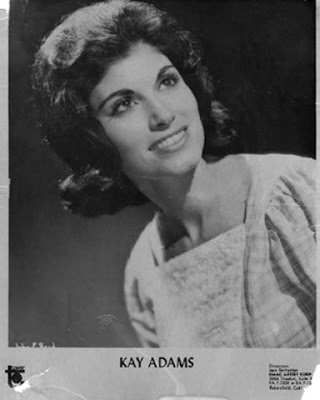 
Kay Adams was born Princetta Kay Adams in Knox City, Texas, the fourth of five children to Charley Alva Adams (1908–1969) and Ola May Henson (1914–1993). Her father was a talented fiddle player. She moved at the age of 10, along with her family, to Vernon, Texas. 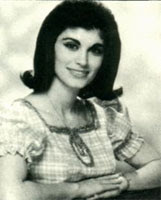 The One-Hit Wonder Club was not restricted to the lucrative Billboard Pop Top/Hot 100 singles charts, and among pure Country artists you have Kay Adams  But it wasn't for a lack of trying. From 1965 to 1969 she had an even dozen singles released by the Capitol subsidiary Tower Records to go along with four LPs and followed that with 7 more singles into 1978 for other labels (including Capitol proper) and one more album.


She  arrived on the country scene with the songs "Six Days a Waiting," "Old Heart Get Ready," "Anymore," "Don't Talk Trouble To Me," "Trapped," "Roll Out The Red Carpet," "I Cried At Your Wedding," "Honky Tonk Heartache" and "She Didn't Color Daddy." She appeared as a regular on such Bakersfield based country music TV programs as Buck Owens’ Ranch and the Dave 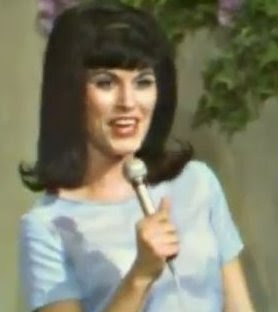 
At the inaugural Academy of Country Music Awards, in 1965, Adams was named Top New Female Vocalist. Merle Haggard was named Top New Male Vocalist, while Top Male Vocalist and Top Female Vocalist went to Buck Owens and Bonnie Owens. The following year, Adams was nominated for Top Female Vocalist.
Wheels And Tears produced by Cliffie Stone (Tower LP ST-5033) and released in September 1966,was her her second album, it contains her only charted single, the delightful up-tempo trucking song Little Pink Mac about a female trucker who had her male opposites asking "who's the gal in the little pink Mack?" It peaked at # 30 Country in Oct-Nov 1966 b/w That'll Be The Day (a slow ballad about a wife lamenting her trucker husband's frequent absences and clearly not the Buddy Holly hit). Both sides were billed as Kay Adams with The Cliffie Stone Group (Tower 269). 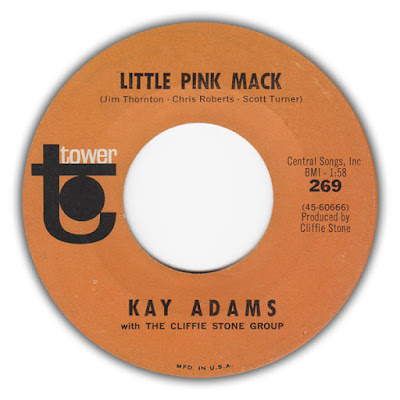 Adams's vocal style carried a lot of Wanda Jackson’s sassy, husky-throated rockabilly abandon, a hint of Wynette’s lovelorn sob and a sense of Connie Smith’s emotional openness. More than just a novelty tune, "Little Pink Mack" was a friendly-but-firm challenge to the testosterone and diesel-fueled world of the "knights of the highway," long distance truckers.


Her 1966 album "A Devil Like Me Needs An Angel Like You" was a duo with singer Dick Curless. Two more album cuts, Six Days 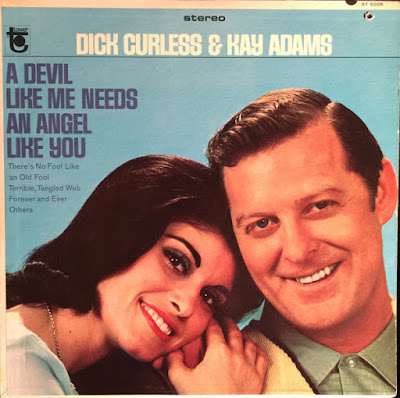 A-Waitin' (an "answer" song to Dave Dudley's Six Days On The Road) and a new interpretation of the Red Simpson hit Big Mac came out as the singles Tower 329 in April 1967 and Tower 395 in Jan 1968 but nether made the charts and she basically fell off the radar by the end of the decade. She also sang on the soundtrack-album of the western movie Killers Three (1968), which also featured Merle Haggard and Bonnie Owens.


Adams was married first to Robert W. Willard, in 1958. They were divorced in 1967 at Bakersfield. She and her second husband also divorced. She married for a third time to a man named Buck. She and Willard had two sons, the eldest being Daniel Ray Willard (born December 19, 1959).

In the 1970s, she recorded "I Never Got to Nashville" for Cliffie Stone's Granite Records. Most recently she recorded "Mama Was A Rock (Daddy Was A Rolling Stone)" in 1996 with BR5-49 for the compilation CD "Rig Rock Deluxe: A Musical Salute To The American Truck Driver", and "Trixie's Diesel-Stop Cafe" with The Dixie Bee-Liners on their 2009 bluegrass concept album "Susanville".  (Info mainly Wikipedia)

A big thank you to Maria @ El Rancho for active link.

A big thank you to Dusty @ loadsamusic forum for active link

A big thank you to Maria @ El Rancho for active link

Open Drive seems to be defunct. If anyone has a problem with my mp3 payer then I'll revert back to Zippyshare. Comments welcome.

Thanks Bob. Can't wait to give these a listen.