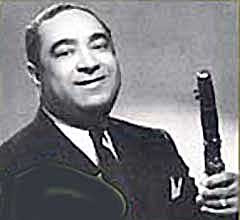 Jimmie Noone (April 23, 1895 – April 19, 1944) was an American jazz clarinetist and bandleader. After beginning his career in New Orleans he led Jimmie Noone's Apex Club Orchestra, an influential Chicago band that recorded for Vocalion and Decca Records. Maurice Ravel acknowledged basing his Boléro on a Jimmie

Noone improvisation. At the time of his death Noone had his own quartet in Los Angeles and was part of an all-star band that was an important force in reviving interest in traditional New Orleans jazz in the 1940s.
Noone was born in Cut Off, Louisiana, and started playing guitar in his home town; at the age of 15, he switched to the clarinet and moved to New Orleans, where he studied with Lorenzo Tio and with the young Sidney Bechet, who was only 13 at the time. By 1912, he was playing professionally with Freddie Keppard in Storyville, and

played with Buddy Petit, Kid Ory, Papa Celestin, the Eagle Band, and the Young Olympia Band, before joining the Original Creole Orchestra in Chicago, Illinois in 1917. The following year, he joined King Oliver's Creole Jazz Band, then in 1920 joined Keppard in Doc Cook's band which he would remain with for six years, and make early recordings with.
In 1926, he started leading the band at Chicago's Apex Club. This band, Jimmie Noone's Apex Club Orchestra, was notable for its unusual instrumentation—a front line consisting of just Noone and alto saxophonist/clarinetist Joe Poston, who had worked with Noone in Doc Cook's band. The influential Pittsburgh-born pianist Earl Hines was also in the band for a time.
Noone signed with Brunswick in May, 1928 and was assigned to their Vocalion label. From his first session yielded "Four or Five Times" b/w "Every Evening (I Miss You") (Vocalion 1185), which was a best seller. 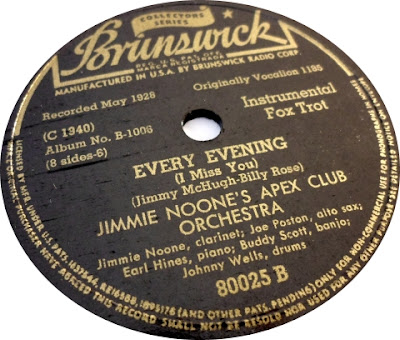 "The quintet which Noone brought to Vocalion was unique in that it preserved New Orleans' musical concepts without using brass instruments," wrote jazz historian Richard Hadlock in his notes to Decca's 1994 remastered reissue of the 1928–1929 Apex Club Orchestra recordings. "Joe Poston and Noone took turns playing a loose, melodic lead and the powerful right hand of Hines was often blended into the front line to plump up the harmony. … Noone seemed to keep one foot in traditional New Orleans bandsmanship and the other in the new movement toward virtuoso swing solo playing."

He continued recording for Vocalion prolifically through February, 1935. He then signed with Decca in early 1936 and one session each for Decca in 1936, 1937 and 1940. He did one session for Bluebird also in 1940. With the swing music craze dominating jazz, Noone tried leading a big band—singer Joe Williams made his professional debut in 1937 with the group—but he went back to his small-ensemble format. 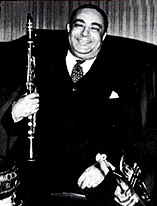 In 1935, Noone moved New York City to start a band and a (short-lived) club with Wellman Braud. He then returned to Chicago where he played at various clubs until 1943, when he moved to Los Angeles, California.
On March 15, 1944, Noone made his first appearance with an all-star band featured on CBS Radio's The Orson Welles Almanac—a band that was an important force in reviving interest in New Orleans jazz. The band consisted of Mutt Carey (trumpet), Ed Garland (bass), Kid Ory (trombone), Bud Scott (guitar), Zutty Singleton (drums), Buster Wilson (piano), and Jimmie Noone (clarinet). Other than Singleton, Noone was the only band member who was working regularly, performing with his own quartet at the Streets of Paris in Hollywood. Their performances on the Welles show were so popular that the band became a regular feature and launched Ory's comeback.

Noone performed on four broadcasts of The Orson Welles Almanac. On the morning of the fifth broadcast, April 19, 1944, he suddenly died at home of a heart attack, aged 48. The Ory band, with New Orleans-born clarinetist Wade Whaley, played a blues (titled "Blues for Jimmie" by Welles) in his honour on the radio, and the number eventually became a regular feature for the Ory band. 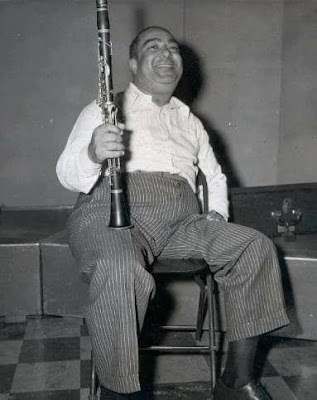 Noone is generally regarded as one of the greatest of the second generation of jazz clarinetists, along with Johnny Dodds and Sidney Bechet. Noone's playing is not as blues-tinged as Dodds nor as flamboyant as Bechet, but is perhaps more lyrical and sophisticated, and certainly makes more use of "sweet" flavoring. Noone was an important influence on later clarinetists such as Artie Shaw, Irving Fazola and Benny Goodman.

His son, Jimmie Noone, Jr., suddenly emerged out of obscurity in the 1980s to play clarinet and tenor with the Cheathams. (Info mainly Wikipedia)
Posted by boppinbob at 02:18


Album Notes
Among Classics many Jimmie Noone discs, this collection of sides from 1928-1929 stands as the best. How could it not, what with it's wealth of top-notch material Noone and pianist Earl Hines cut while flourishing in the Chicago club scene. And while the overall quality of the ensemble playing is a bit subpar at times -- certainly, there's not much here to compare to Hines' contemporary triumphs with Louis Armstrong -- the sheer joy and deftness heard in Noone's solos and Hines' backing make for an enjoyable listen throughout. Along with picaresque Noone vocals like "Four of Five Times" and "Ready For the River," the 23-track mix includes such classics as "Apex Blues," "A Monday Date," and "Sweet Lorraine." This works very nicely as a generous and concise roundup of some of Noone's best work. ~ Stephen Cook