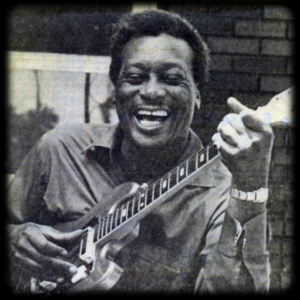 Arthur Neal Gunter (May 23, 1926 – March 16, 1976) was an American blues guitarist and musician. Brother of Al Gunter aka Little Al. He was best known for his song "Baby Let's Play House", which was later a hit single for Elvis Presley.


Gunter was born in Vesta, Oglethorpe County, Georgia.* His father was a preacher; he and his brothers, Jimmy and Junior, and cousin Julian, sang spirituals as the Gunter Brothers Quartet. He learned 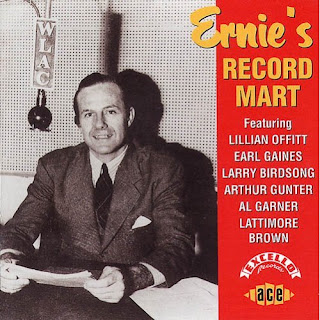 He frequented the record store run by Ernie Young where he met pianist Louis Brooks, and played gigs with Brooks’ band, but most of the time he performed just with cousin Julian on drums. Ernie was to go on to start another business, forming the Excello label in 1952, as a subsidiary to the Gospel label, Nashboro. Arthur later sang with various Blues bands around Nashville. When he wrote a song called ‘Baby Let’s Play House’, Arthur took it to Ernie, and the record was released in November 1954. 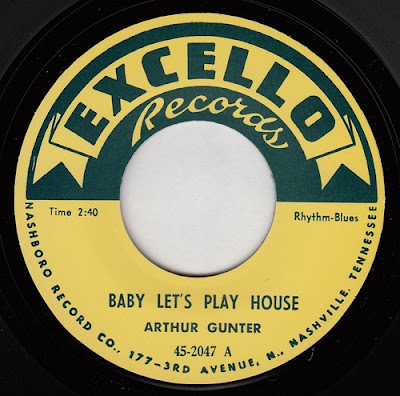 It was picked up by Leonard Chess on one of his scouting trips as he rambled around the South in search of talent for his label back in Chicago. Chess’s national distribution network made the record a reasonably big hit and it became Excello’s biggest 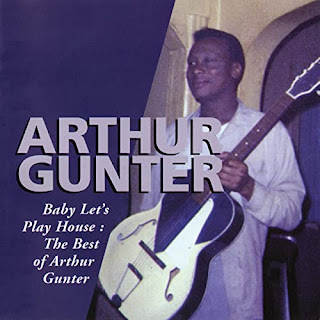 selling single to date, which not only became a local hit, but peaked at number 12 in the US Billboard R&B chart. That December, the Thunderbirds vocal group recorded their version, issued on DeLuxe, in Miami. Three months later, it was one side of Elvis Presley’s fourth Sun Records single and it became a world-wide smash hit.

Arthur’s first royalty check was for $6,500, which would have bought him a fleet of Cadillacs. He commented, “Elvis got that number and made it famous, but I never got the chance to shake his hand.” Gunter would later say. 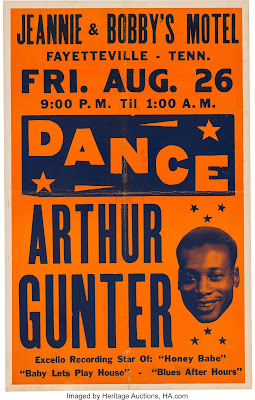 Gunter wasn't even close to being the most groundbreaking bluesman on the block, but he was engaging enough in his way with his chunky rhythms and earnest singing. He never really strayed from the style of that hit, but it's easy enough to get why Elvis though enough of him to cut one of his songs. Gunter continued to record for Excello, but none of his succeeding 11 singles did as well, and Excello dropped him in 1961. His brother Little Al also made two singles for the company. 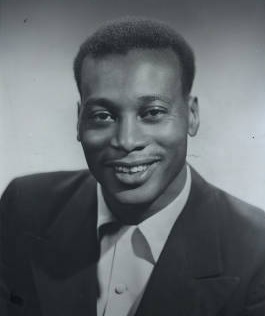 Gunter moved to Port Huron, Michigan, in 1966 and completely abandoned music. In 1973 he won $50, 000 in the Michigan State Lottery, and played as part of the Ann Arbor Blues Festival’s ‘Music Of Detroit’ afternoon. He died of pneumonia in 1976, aged 49, at his home in Port Huron, Michigan

(Edited from Wikipedia & The Encyclopedia of Popular Music
* other sources give birthplace as Nashville, Tennessee)

Arthur Gunter, a seemingly obscure blues singer will never be forgotten because he holds a unique place in American pop history. His first recording, 'Baby Let's Play House' in 1954 for Excello Records of Nashville became one of the first recordings by Elvis Presley. This is the first time both sides of his Excello singles have been collected together in chronological order and the quality of these sessions are all exciting and typical of the kind of blues popular in the south. Listen to the sounds of Arthur Gunter and wonder at the impression it must have had on the young Elvis Presley - stunning by all accounts. This collection is a must for blues and R&B fans. (Jasmine notes 2016)