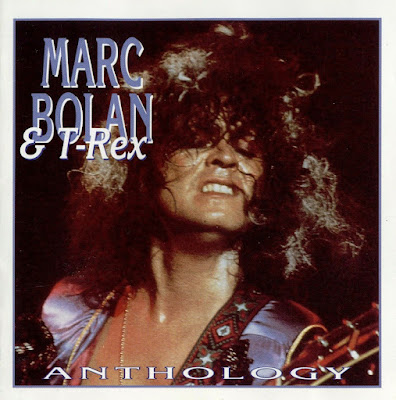 Marc Bolan (30 September 1947* – 16 September 1977) was an English singer-songwriter, guitarist and poet. He is best known as the founder, front man, lead singer & guitarist for T. Rex, but also a successful solo artist. His music, as well as his highly original sense of style and extraordinary stage presence, helped create the glam rock era which made him one of the most recognizable stars in British rock music. 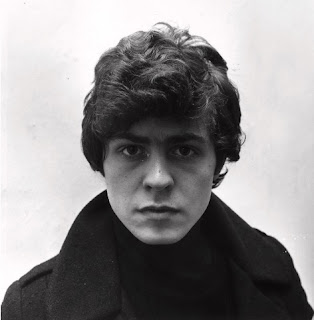 Marc Bolan was born Mark Feld in Hackney London. Following stints as a male model, playing in a school band with Helen Shapiro and being a Mod about town he started to make serious efforts to be a star. Marc's debut single "The Wizard" was released, on Decca Records in the U.K, in 1965 and followed up with, "The Third Degree" &"Hippy Gumbo . 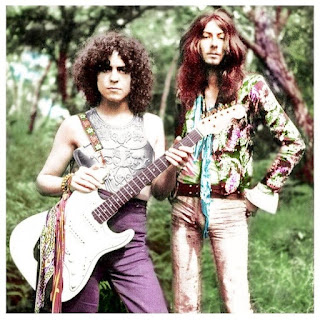 As sales were not good his then manager Simon Napier-Bell, arranged for him to join the group John's Children in early 1967. Later in 1967 Marc and percussionist Steve Peregine Took formed an acoustic duo called Tyrannosaurus Rex. They made three albums, then following an acrimonious American tour, split up. Steve Took died tragically in 1980 after choking on a cherry stone. Marc brought in Mickey Finn as a replacement for the new album Beard of Stars (1970). This album also returned Marc to his electric roots. 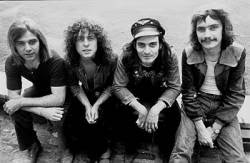 In 1970 Marc shortened the group name to T. Rex. The change worked as later that year they achieved a no 2 U.K. hit with "Ride a White Swan," the first of ten straight Top Ten hits, and the album "T. Rex" was well received. The group was enlarged to include bass player Steve Currie and drummer Bill Legend. 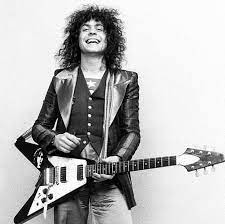 T. Rex were now a full-fledged electric band, and scored number one hits in 1971 with "Hot Love" and "Get It On." Renamed "Bang a Gong” the song became T. Rex's only notable U.S. hit, making the Top Ten in 1972. The album "Electric Warrior" (1971) was released and is still thought by many to be T.Rex's finest hour. It topped the U.K. charts and "Jeepster" was lifted from it as a single by the record company, apparently against Marc's wishes. 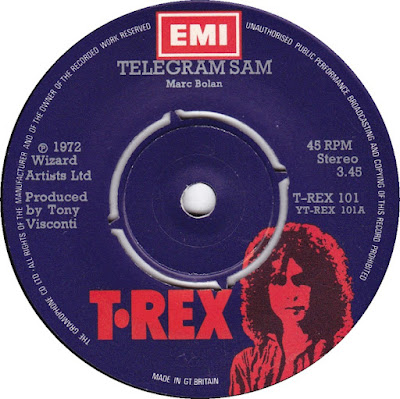 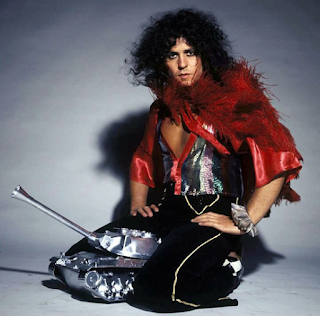 March 1973 saw the release of "20th Century Boy," the ninth T. Rex Top Ten single and possibly now the most famous today, due to it's use in a "Levi", advert featuring a young Brad Pitt, in 1991."Tanx" the album, featuring Marc sitting on a small tank in a suggestive way, also went top 10 In June 1973, "The Groover" famous for the intro shout of T-R-E-X! became the groups's tenth and final Top Ten single.

Marc tried using his own name on records, issuing the non-charting "Blackjack" single+  credited to "Big Carrot", also issuing "Teenage Dream" as Marc Bolan and T.Rex, finally going back to the "T.Rex brand" even though the original group was fragmenting, Bill Legend having already left. The album "Zinc Alloy and the Hidden Riders of Tomorrow" (1974) can really be seen as the start of Marc Bolan's decline. Around this time Marc also parted company with his wife June, following an affair with T.Rex backing singer Gloria Jones. Long time producer Tony Visconti also left. Marc would now produce on his own. The singles "Teenage Dream" and "Truck On (Tyke) both missed the top 10, more proof of the slip taking place. 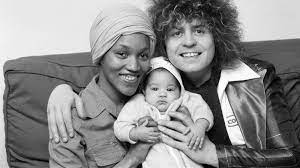 Marc's increasing use of drink and drugs had made him noticeably overweight That coupled with his desire to crack America only dimmed his star more in the U.K. A constantly changing line up for T.Rex also left fans wondering what was going on. A change of style hinted on "Zinc Alloy" became fact on the next album, "Bolan's Zip Gun" (1975). Around this time Mickey Finn also departed T.Rex. On 26 September 1975 Marc and Gloria had a child and called him "Rolan" 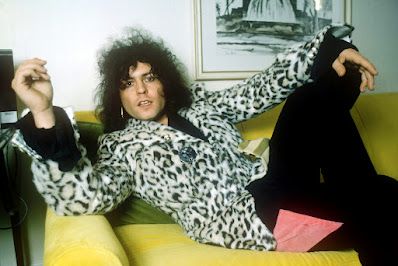 This new responsibility had a positive effect on Marc and he started to cut back on his excesses, although the drink was still a problem. Marc left the UK for tax reasons in early 1976 spending the year between Monaco and the USA. A new television show called "Supersonic" appeared in the UK, it's host Mike Mansfield was to become a leading light in returning Marc Bolan to the public stage. This coupled with Marc's interviewing slot on the "Today" show propelled Marc back as a 'face'. The album "Futuristic Dragon" was released in 1976. 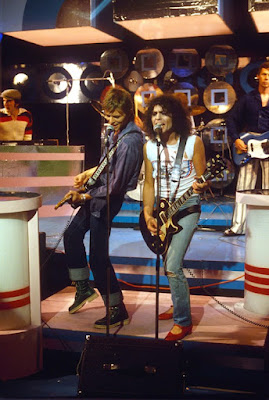 The arrival of Punk had obliterated most of Marc's fellow chart acts from the early seventies, with the notable exception of David Bowie. Ironically Marc's last televised performance was with David Bowie in the final "Marc” show recorded just days before Marc's death. It was shown posthumously in tribute.

For much of his life Marc Bolan had always said he would not live to make 30 years old. In the early hours of 16 September 1977 a purple Mini 1275 GT driven by Gloria Jones left the road and hit a tree in Barnes, London. In the passenger seat was 29 year old Marc Bolan. He was killed instantly, two weeks short of his 30th birthday.  (Edited from marcbolan.eu)

A big thank you goes to Muro @ Classic Rock for the loan of the above 3CD set.