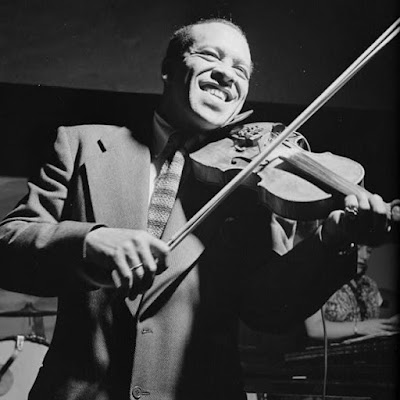 Hezekiah Leroy Gordon Smith (August 14, 1909 - September 25, 1967), better known as Stuff Smith, was one of the preeminent jazz violinists of the swing era. He was also a hard drinking character, often wearing a tattered top hat and a stuffed parrot during his performances. He is fondly remembered as “the cat that took the apron-strings off the fiddle.” 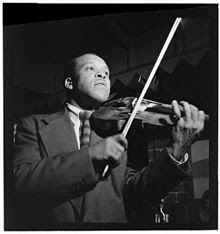 Stuff Smith was born in Portsmouth, Ohio, but grew up in Cleveland. His father taught him to play the violin and encouraged him to study classical music. Smith took some music lessons but switched to jazz after hearing Louis Armstrong play the trumpet; Armstrong influenced Smith's own style at a fundamental level. Although he had received a scholarship to study at Johnson C. Smith University, Smith opted for a musical life instead. At age 15 he joined a touring minstrel show, the Aunt Jemima Revue. 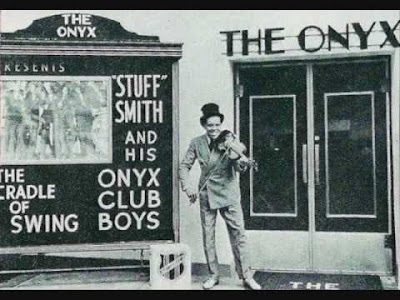 In 1926 Smith joined the Dallas-based band of Alphonso Trent; this was one of the so-called “territory” bands that grew from the improvisatory and bluesy roots of jazz rather than moving toward the more composed and arranged style of the eastern seaboard. He stayed with Trent for four years, moving briefly to the band of Ferdinand “Jelly Roll” Morton but returning after becoming frustrated that his violin could not be heard over the dense sound of Morton's group. In 1930 Smith formed his own band in Buffalo, New York. 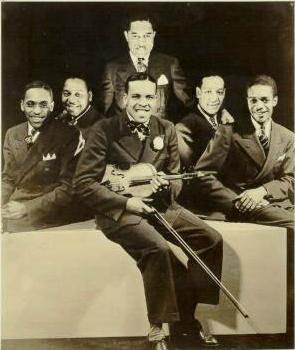 During his Buffalo years Smith cast one eye on New York, and he got there in late 1935 and 1936 after he composed a scat-like novelty song called “I'se a Muggin'” (the words seem to have no specific meaning). The song caught on, and musician-impresario Dick Stabile booked Smith and his band, which now included drummer “Cozy” Cole, into the Onyx Club on 52nd Street. Rechristened Stuff Smith and His Onyx Club Boys, the band was a successful fixture of the New York scene for several years. The main attraction was Smith himself, attired in a worn-out top hat and sometimes sporting a parrot on his shoulder. 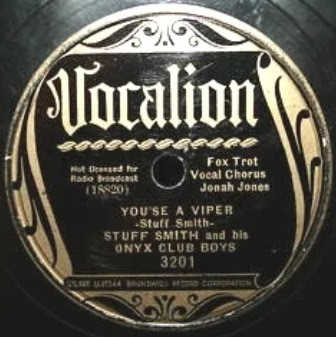 Smith and his band also recorded several sides for the Vocalion label in 1936. “I'se a Muggin'” became a moderate hit, but another recording of that year turned out to have longer-lasting resonances--”You'se a Viper,” was covered by vocalist “Fats” Waller in 1943 and enjoyed renewed popularity in the counterculture of the ‘60s and ‘70s. 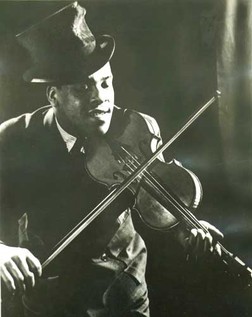 In musical terms, Smith's Onyx Club years were historically significant; he pioneered the use of the amplified violin, and he developed a bluesy, speech-inflected style that was quite distinct from the European-influenced approaches of Swing Era violinists Joe Venuti, Stephane Grappelli, and Eddie South.

In 1938 Smith appeared in the film ‘Swing Street,’ taking a hiatus from live performing. That took the momentum out of his New York career, and he dissolved his band after a series of disagreements with players and other industry figures. Smith bounced back with a trio that performed in New 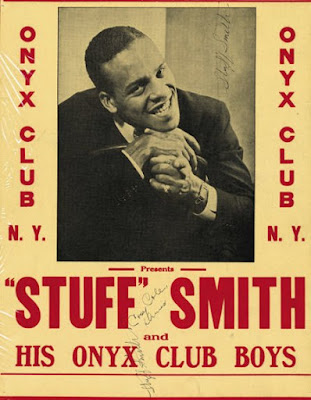 By 1945. Smith was a heavy drinker and found himself at odds with club owners, musicians, bookers and managers which had a major impact on his career. In 1950 he appeared regularly on broadcasts by Chicago DJ Al Benson but he was fired for getting into a fist fight with his host on the air. In 1951 he toured with Dizzy Gillespie and in 1953 made a recording with Herman Poole Blount who would later be known as Sun Ra. In 1956 he joined Nat King Cole on his hit album "After Midnight". 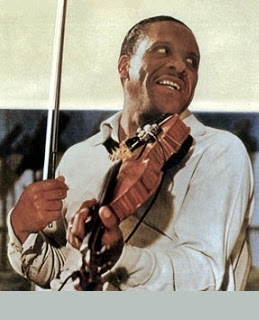 Smith was still much admired by his fellow musicians, and he moved to California and continued to perform on what was said to be a centuries-old Guarneri violin. Among his fans was big-time jazz producer Norman Granz, who teamed Smith with bebop trumpeter Dizzy Gillespie and pianist Oscar Peterson for a recording on the Verve label in 1957. It was a measure of the originality of Smith's style that his playing fit as well with this new generation of players as it had with the swing bands of the 1930s. Smith made several albums for Verve and continued to record until shortly before his death. 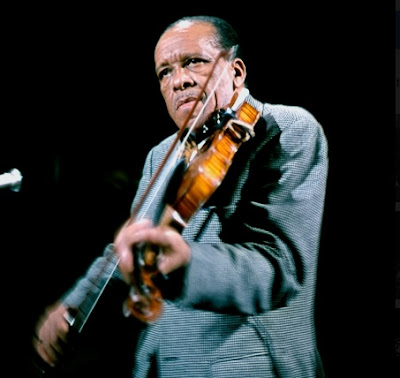 Touring widely in the 1960s, Smith, like so many other jazz musicians, found that European audiences were especially appreciative of his music. He settled in Copenhagen, Denmark, in 1965 and made several recordings in Europe. Smith fell seriously ill on tour in Paris. Doctors placed him on the critical list; but Smith recovered and continued to perform, but with half of his liver and stomach already removed as a consequence of his heavy drinking he would only last another two years before his death in Munich at the age of 58 on September 25, 1967.

It is a shame that Stuff Smith did not live to see the revival of interest in swing violin due to his premature death in 1967, almost three decades prior to the passing of fellow violinist Stephane Grappelli. Almost all of Smith's recordings languished out of print until a two-CD set finally appeared on Verve, soon followed by this more complete four-CD Mosaic collection of Smith's recordings for the label, which adds three completely unissued sessions and five additional previously unreleased tracks.

The first two studio dates were scheduled for release but never put out by Verve, yet the music is simply astonishing. Smith is in top form throughout all ten sessions. The supporting cast is tremendous: pianists include Jimmy Jones, Carl Perkins, Oscar Peterson, Wynton Kelly, Shirley Horn (who was overlooked and credit was originally given to John Eaton, who likely appears on two tracks), and Paul Smith. Bassists include Red Callendar, Curtis Counce, Ray Brown, Red Mitchell, and Milt Hinton; other important musicians are Dizzy Gillespie, Barney Kessel, Alvin Stoller, J. C. Heard, Kenny Burrell, and fellow violinist Ray Nance.

Smith plays quite a few enjoyable originals (including his blazing "Hillcrest," the very catchy "Calypso," and the exotic "Desert Sands"), but he also covers an extensive collection of Gershwin songs and other standards from some of the best composers of the Great American Songbook, and classic songs from the playbooks of Duke Ellington and Fletcher Henderson. While some tracks are clearly stronger performances than others, there is not one song that won't be devoured eagerly by fans of Smith's swinging jazz violin. This limited-edition boxed set should be considered an essential acquisition by fans of swing.

Stuff Smith's poor health in his later years didn't stop him from performing or recording, this studio date in Germany was recorded not long before his death on September 25, 1967. With a band of competent but not well known European musicians backing him, the violinist completed seven numbers for his final record, all standards of various vintage. Smith, of course, is the centerpiece of the LP; although he only uses a small portion of his bow, his unorthodox approach to the instrument produces a very distinct sound all his own. His vibrato-filled introduction to "Cherokee" is followed by a fine solo by pianist Otto Weiss and several brief drum breaks by Charley Antolini. His most adventurous playing takes place during "Sweet Lorraine," in a happy arrangement that almost seems like someone whistling as he jauntily walks down the street, though his second solo within the song makes great use of dissonance. Tenor saxophonist Heribert Thusek plays in unison with Smith during the opening to "One O'Clock Jump" and takes a swinging solo prior to the leader; he is also present on one other number, a foot tapping easygoing take of "What Is This Thing Called Love?" Unfortunately, this LP disappeared from print rather rapidly after its 1972 release when BASF quit the record-making business, so fans of Stuff Smith may have a very difficult time locating a copy of this excellent LP. ---Ken Dryden, AllMusic Review

A big thank you to theblues-thatjazz.com for active links for the Verve box set and memorial album.

Thanks to audiotut for mp3's.

This delightful CD has the first 24 titles ever led by violinist Stuff Smith, virtually all of Smith's prewar recordings and the complete output of the violinist's Onyx Club Boys (other than four songs from 1940). With trumpeter Jonah Jones and occasional drummer Cozy Cole the stars of the supporting cast, this was one of the top swing combos of the era. Smith's hard-swinging violin, his enthusiastic vocals, and his interplay with Jones made this a particularly hot unit. In addition to the hit "I'se A-Muggin'," highlights of the disc include "I Hope Gabriel Likes My Music," "After You've Gone," "You'se a Viper," "Old Joe's Hittin' the Jug," "Twilight in Turkey," and the classic "Here Comes the Man With the Jive." Highly recommended.