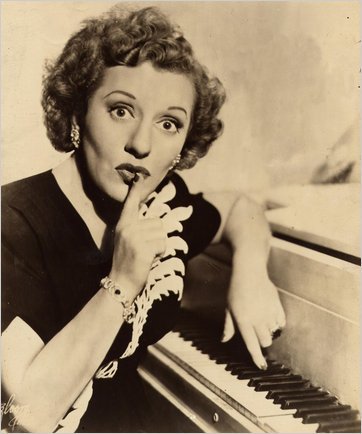 Frances Faye (November 4, 1912 – November 8, 1991) was a United States cabaret and show tune singer, Songwriter, Actress and pianist. She was born to a working-class Jewish family in Brooklyn, New York City. Her double-entendre songs and throaty laughter made her a favourite on the Los Angeles saloon scene for 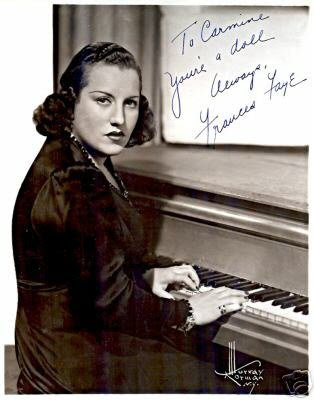 40 years.
Fans of female vocalists of the '50s inevitably bemoan the lack of respect given to one of the true greats. Frances Faye, likePeggy Lee, was a dishy, somewhat off-kilter blonde who could scribble out a mean tune when the mood hit her. She was actually a recording presence in the decade’s prior, writing and co-writing songs that were recorded by herself and other artists such as the Andrews Sisters all through the late '30s and '40s.


Born as Frances Cohen, Faye's showbiz career began at 16, filling in for a local pianist on an amateur show when some misfortune 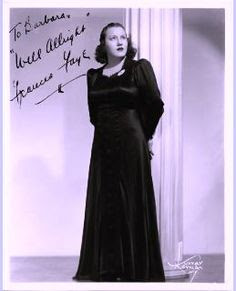 befell him. She made her first stage appearance in Brooklyn two years later, and spent the next few years on the vaudeville and nightclub circuit, as an accompanist for singers. When one of these singers was canned by a nightclub owner right before the downbeat, Faye took over. An extensive career as a nightclub performer followed and, by 1934, her schedule had her working 11 months a year, much of that out on the road. In 1936, she had her first hit record, the thoughtful "No Regrets," in 1936. "Well, All Right" primed the jukeboxes across the nation after the Andrews Sisters cut the song.
The following year, Faye co-starred in the Bing Crosby and Martha Raye vehicle Double or Nothing; Faye played the sister of Raye, and they perform a nightclub act together. A musical highlight is the performance of "After You," with both gals plus Crosby. As a singer, Faye was considered to be on the level of a Dinah 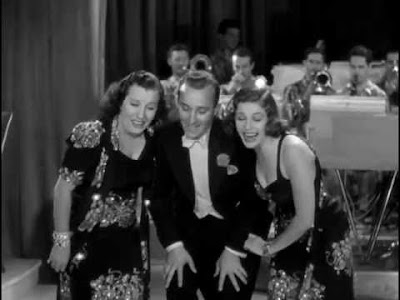 Washington, in terms of power and not at all of the cutesy-cutesy female pop singer variety.
When she played her own keyboard accompaniment, club owners sometimes complained that she had pounded the piano so hard that all that remained of parts were sawdust. Faye could do the type of romantic material that more commercial performers such as the bubbly Doris Day were known for, but also included obscure songwriting gems in her repertoire as well as funky, naughty rhythm & blues numbers. 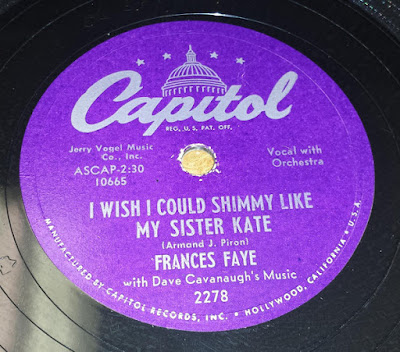 Faye continued to compose throughout her career, including the songs "Purple Wine," "You're Heavenly," "Frances and Her 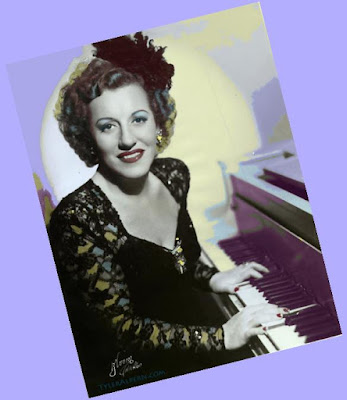 Friends," and "A Good Idea." As if more intent on pleasing music critics than the general audience -- and bless her heart for it -- she left the big-time Capitol contract and began cutting sides for the jazz-oriented Bethlehem company. As expected, quality improved, as well as range. Yet her career seemed to suffer due to lack of more general exposure.

While other vocalists had done TV, Faye had not. Her film career was not much better, consisting of only two small bits. Perhaps she was not glamorous enough for the '50s mass media or Hollywood crowd. Even more likely, the industry was not so receptive to performers who were so open about their alternative sexuality. Faye was not only an 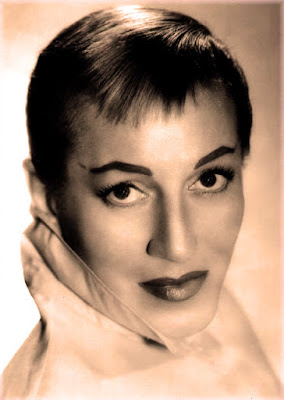 influence on the sassy-and-saucy nightclub performers such as Lena Horne, Eartha Kitt, and Bette Midler, but was also one of the very first openly gay female performers, dropping the rhyming couplet "Faye, Faye, gay, gay/is there any other way?" into her on-stage patter just in case anyone didn't get the idea.
She made her last major recordings in 1964, but continued club gigs all the way into the '80s. Well into the 1970s, she was still headlining in New York, Los Angeles, Las Vegas, Chicago, Miami, as well as England and Australia. In 1977, Frances Faye played a wise-cracking madam in the French film director Louis Malle's controversial film Pretty Baby, which, in the words, of Faye, "opens with me in bed smoking an opium pipe with a wig half off my head."

After a series of strokes, perhaps brought on by so much excitement, she died in the early '90s. It was only near the end of that decade that any of her previously out of print material began to see the light of day in reissue form. Her career was one of the subjects of the interesting documentary film Chop Suey, directed by Bruce Weber. (Compiled mainly from bio by Eugene Chadbourne @ All Music)

Oh, I was pleased about this one!!! But the link doesn't work anymore. Can you provide another one, please? Thanks in advance...

Thanks again, Bob, for introducing us to performers that we probably never would have discovered without your generous efforts :-)