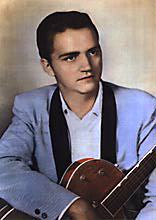 Bobby Wayne was born, Robert Wayne Snyder, in Spokane, Washington on September 10, 1936. As the youngest son of Paul and Virginia Snyder, Bobby learned to play the piano at age nine. As a small boy, he listened to the Grand Old Opry and The National Barn Dance on the radio on Saturday night. As a preteen he loved the music of Red Foley, Ernest Tubb and other country

music artists. Among the "back up groups" he liked as a teenager, were the legendary Jordanaires.
Bobby Wayne was just seventeen when he was exposed to Elvis Presley's music. This happened while he was visiting his mother in Atlanta, Georgia. Returning to Spokane, Bobby started performing his own rockabilly songs, exposing Pacific Northwest music fans to their first taste of rockabilly music. In 1955 he went into the studio to record Sally Ann and War Paint. He thus joined the famous Bill Haley, Elvis Presley and Rick Carty as one the first actual recording "rockabilly" artists in the world.
In the early 60's Bobby's career started to take off fast. Bobby was heard by Jerry Dennon, West Coast record producer. Bobby's first record for Jerden, "Big Train/ The Valley" was an instant hit. Within four weeks after it's release, Columbia Records leased, "Big Train/The Valley."

Bobby's voice had gotten a lot lower and Bobby sounded very much like another early Rockabilly artist, Johnny Cash. Johnny had fallen victim to hard drugs and Columbia Records was looking for a replacement and that replacement was Bobby Wayne. Johnny's producers in Nashville, Frank Jones and Don Law didn't like what they heard and were fearful that Johnny would be fired. (He hadn't had a hit in a couple of years). They begged the New York office for another chance. They hit pay dirt as the song was a Merle Kilgore-June Carter composition, "Ring of Fire". Johnny was back in business. Bobby Wayne's, "Big Train" was never released on Columbia, but Epic instead. (Epic is a subsidiary of Columbia).
Within the next five years, Jerry had Bobby on Warner Brothers, 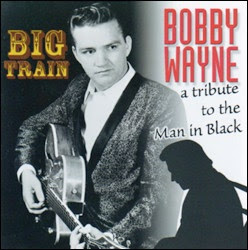 ABC Paramount, A&M, Quality Reo, W&G in Australia and P.Y.E. in England, Panorama, Piccadilly and Liberty. Bobby also recorded under the name, Deke Wade, (Tall Oak Tree), and The Hummingbirds, "Lotta Loving", and "Bluebirds over the Mountain, La Den Da Da and Fern. Bobby Wayne, also a fine guitarist, recorded a number of instrumentals, including "Bobbies Boogie #1," "Wheels," "Twinkle Toes," "Blue Tango" and "Honky Tonk". One of his very best instrumental recordings, "Tip Toes," made its way well up on the charts, reaching # 3 in the Winnipeg, Canada area. In 1966 Cash Box Magazine recognized Bobby Wayne, along with Roy Clark and Glen Campbell, as one of the top three Guitar players in America. 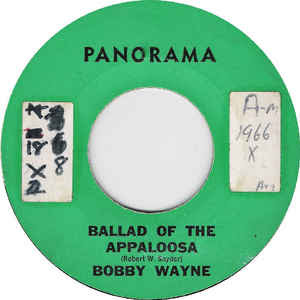 In 1966 Bobby cut twelve tracks for Jerden, all of which had a horse as the subject. This is the famed 'Ballad Of The Appaloosa' set and in reality was one of the first concept albums. Bobby laid down the lead tracks in Seattle, with vocal backing by The Jordanaires being subsequently added in Nashville but the 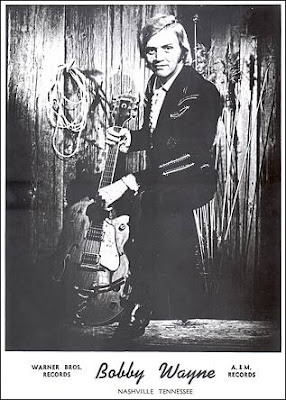 recordings are seamless. The single 'Ballad Of The Appaloosa' c/w 'The Blizzard' was issued in November 1966 and was followed by an album of the same title, both of which appeared on Panorama. This title track was also used as the theme for the award winning Walt Disney movie 'Run, Appaloosa, Run'. Bobby's five-year contract with Jerden expired at the end of 1967 and was not renewed.
In 1973, Bobby cut the album 'Nous Vivons Ensemble' with Guylaine that was released on TC Maximum Records. Guylaine is a French-speaking lady from Canada and at the time of recording, she and Bobby were an item and so they jointly decided to visit Nashville and record the album. Both sing in French and English on the recordings that, in essence, 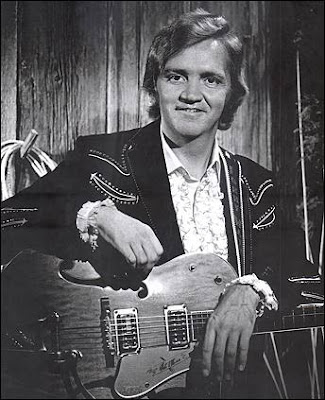 were aimed at the French speaking regions of Canada.
He recorded an album in 1981 on Piccadilly entitled "Outlaw" (issued in the UK) and one for Wild Fire in 1996 called "Go Rockabilly".
Since then, Bobby has resided in Spokane, Washington running his own auto windscreen replacement business and performing music, often up to three nights a week. He, along with Don Weise, played Hemsby a few years back and demonstrated a great guitar picking skill and good showmanship. In 2004 he  recorded some sides that subsequently appeared on the CD 'Hot Rod Motorcycles Volume One'.


(Compiled from Rockabilly Hall & Blackcat Rockabilly)
Posted by boppinbob at 03:26

For “Ballad Of The Appaloosa - Bobby Wayne” go here:

A big thank you to Maria @ El Rancho for the active link.

A big thank you to Jake @ Jukebox City for active link.