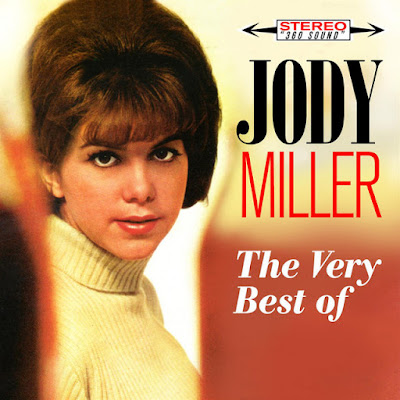 Raised in Oklahoma, she was born Myrna Joy Miller and, inspired by the music of Joan Baez, learned to play guitar at the age of 14. Soon after, Miller joined a folk trio and began performing at a local coffeehouse. Lou Gottlieb, a member of folk group the Limelighters, heard her sing and was impressed enough to offer to help her get a recording contract, provided she move to Los Angeles. Miller initially declined, as she had recently married, but eventually she and her husband went to California to test the waters. A friend of the family arranged an audition with Capitol Records, which signed Miller while suggesting that she change her name from Myrna to the folkier "Jody." 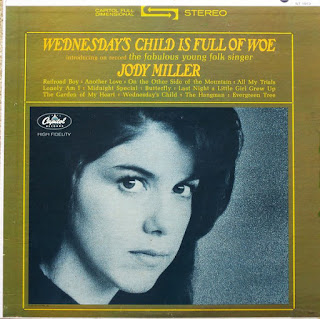 In 1963, Miller recorded her debut album, Wednesday's Child Is Full of Woe, which did fairly well and led to appearances on Tom Paxton's folk music television show. In 1964, she had a minor pop hit with "He Walks Like a Man" but her breakthrough arrived in 1965, when "Queen of the House" reached number five on the country charts and number 12 on the pop charts. Billed early in her career as “The Little Girl with a Big Voice”, Jody Miller was Capitol Records most promising young female vocalist in the 1960s. In an era of petite belters who could shake the rafters with their powerful voices (Brenda Lee, Connie Francis, Lesley Gore, Timi Yuro, et al.), Jody was, for a time, the Capitol Tower’s contender for the title of Pop Music’s Top Princess 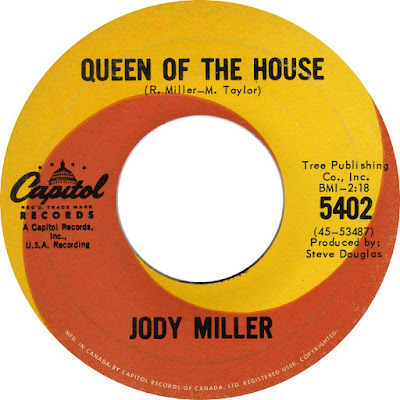 Despite her success on the country charts, Miller continued to have more hits as a pop act; "Silver Threads and Golden Needles," her follow-up to "Queen of the House," was a minor hit in the summer of 1965, as was the protest song "Home of the Brave." For several frenetic years in the 60s, Jody toured Hawaii with The Beach Boys, entertained at an air base in Alaska with Bob Hope, and performed shows with everyone from Herb Alpert and the Tijuana Brass to Don Rickles. 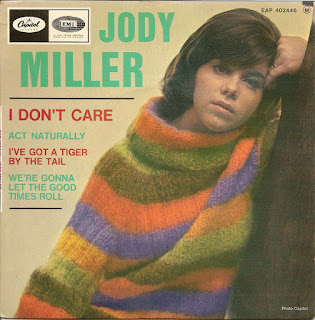 In the middle part of the decade, along with several other recording artists of the day, she also pioneered the music video format in some groundbreaking and eye-popping films for the Scopitone movie jukebox. A true road warrior, Jody’s musical journey has literally taken her around the globe —from England and Italy, to Japan and the Philippines.

During the latter half of the '60s, she released a handful of albums and singles, none of which gained much attention.At the end of the '60s, Miller left the West Coast and returned to her Oklahoma ranch to spend more time with her family. After a few years of semi-retirement, she began recording with Billy Sherrill in Nashville in late 1970; the result, Look at Mine, was released in 1971 and featured a mixture of country-pop songs and a few traditional tunes. The album produced her first string of country hits, as "He's So Fine" and "Baby I'm Yours" reached the Top Ten, and several other songs from the record reached the Top 40. 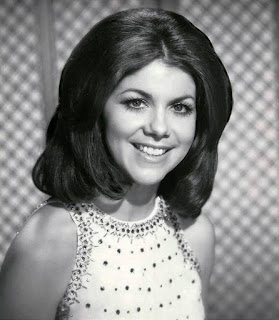 Throughout 1972 and 1973, Miller hit the Top Ten with regularity. However, her comeback ended as quickly as it began -- as of 1974, she no longer was able to crack the Top 40, although she did have a string of minor hits. She managed to bounce back into the Top 40 in 1977 with "Darling, You Can Always Come Back Home," but by and large, her career had stalled. In 1979, her contract with Epic expired and she chose to retire to her ranch with her family.

Miller returned in 1987 with the independently released My Country, which consisted entirely of patriotic songs; it caught the attention of President-elect George H.W. Bush, who invited her to perform at his 1988 inaugural ball. Afterward, Miller's now-grown daughter Robin encouraged her to return to country music and the two formed a duo. In 1990, they tried to secure a record contract in Nashville, but were unsuccessful. 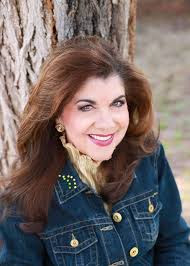 Miller re-emerged as a gospel singer in the late '90s. She cut over a half dozen gospel albums (earning her induction into the International Country Gospel Music Association Hall of Fame in 1998 and her being named 1999’s Entertainer of the Year by the Country Gospel Music Guild), and has now resumed performing her country and pop hits in her shows.

Throughout her entire career, Jody has proven to be such a gifted and versatile vocalist that it has often made classifying her as a singer almost next to impossible. In the past, however, this versatility in several different musical styles often created a dilemma for Jody when dealing with an industry so intent on pigeonholing performers. Exactly where, on the musical continuum, did she belong? The lady herself once asserted, “I love all music…from opera to the blues. One newspaper reporter once said my voice was smoky, but she really meant bluesy, I think. I could never be categorized. Maybe I shoulda done Broadway tunes…” 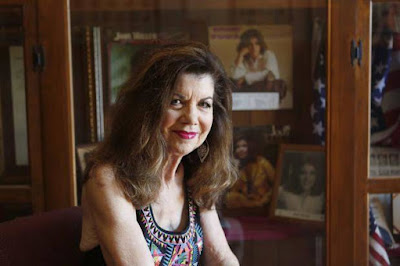 With questioning her proper musical niche long a thing of the past, Jody Miller has amassed a multitude of awards, accomplishments and fans in a multi-faceted career She continues to perform live and sings her secular hits as well as her gospel material..


For “The Very Best of Jody Miller” go here:

Every Epic single is represented on this collection from Ms. Miller.

I've always enjoyed the video performance of her doing Queen of the House on YT.

I'm not sure what television show that is from, but for 1965 TV it is very sexy.

Also in 1965 she released the song Magic Town on a single, about 6 months before The Vogues had a hit with it and I've always much perferred her version. To the best of my knowledge her recording never appeared on a LP or CD and the only way to obtain it is to track down the 1965 single (or download it here now).

Also in 1965 she recorded the Italian song Io Che Non Vivo Sensa Te, which a year later and with different lyrics, became a huge hit for Dusty Springfield, You Don't Have To Say You Love Me.

Thank you SO much for this. It's difficult to find these old country artists.

thank you very much from Aussie

Hello Mike,
The video is from a Scopitone film. Scopitone is a type of jukebox featuring a 16 mm film component. Scopitone films were a forerunner of music videos aimed at the adult market. Google it for more info. I can remember watching a Scopitone jukebox back in 1966 at a holiday camp whist on my summer holls.
Also I have her singing Magic Town on the compilation “The Best Of Jody Miller.” I did not post it as “The Very Best Of Jody Miller” had more tracks. I will send you a link if you want the mp3. Regards, Bob

Hi Bob,
Thanks, but I'm fine with the file I made from the vinyl single.
That was actually the second copy I purchased as the first one went
slighty "out of round" and the audio wobbled on long notes like when
she sings the word "town" in the title.
I have never seen that track on a US LP or CD, but there isn't much
detailed information "out there".
The b-side was on the Home of the Brave LP, I believe.

Thanx for this collection. Know artist & "Queen Of The House" but rest should be "New" hears here.