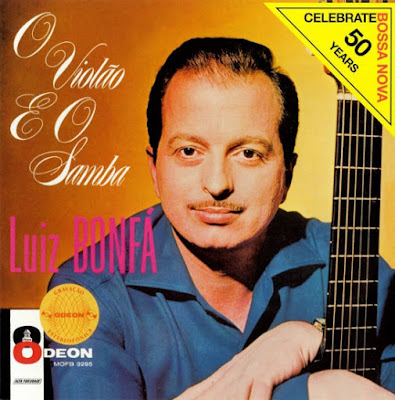 Luiz Floriano Bonfá (17 October 1922 – 12 January 2001) was a Brazilian guitarist and composer. A musician of virtuosity, subtlety, and passion, guitarist Luiz Bonfá ranks among the key architects of the bossa nova sound and the greatest masters of Brazilian popular of the 20th century. Though occasionally and unfortunately overlooked, Bonfá's contributions to the music of Brazil through his work as a composer, performer, and ambassador live on in the genuine joie de vivre of his songs and recordings. 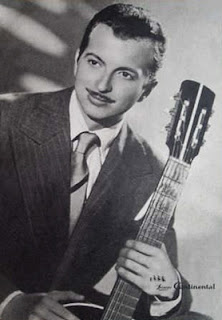 Born near the bay of Guanabara in Rio -- his father was an Italian immigrant -- Bonfá took up the guitar at eleven and studied classical guitar with the Uruguayan master Isaias Savio. He began to work Rio's clubs as a singer with the Quitandinha Serenaders, and by 1946, he was appearing on Brazil's Radio Nacional, then an important showcase for up-and-coming talent. Some of his first compositions such as "Ranchinho de Palha", "O Vento Não Sabe", were recorded and performed by Brazilian crooner Dick Farney in the 1950s.

Bonfá's first hit song was "De Cigarro em Cigarro" recorded by Nora Ney in 1957. It was through Farney that Bonfá was introduced to Antônio Carlos Jobim and Vinicius de Moraes, the leading songwriting team behind the worldwide explosion of the great Bossa Nova in the late 1950s to 1970s, becoming a fever in the US. 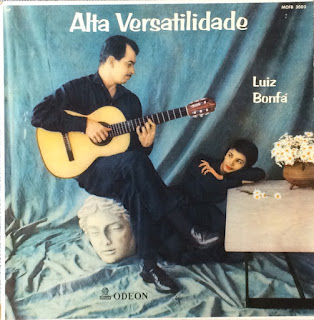 Bonfá collaborated with them and with other prominent Brazilian musicians and artists in productions of de Moraes' anthological play Orfeu da Conceição, which several years later gave origin to Marcel Camus' film Black Orpheus (Orfeu Negro in Portuguese). In the burgeoning days of Rio de Janeiro's thriving jazz scene, it was commonplace for musicians, artists, and dramatists to collaborate in such theatrical presentations. Bonfá wrote some of the original music featured in the film, including the numbers "Samba de Orfeu" and his most famous composition, "Manhã de Carnaval" (of which Carl Sigman later wrote a different set of English lyrics titled "A Day in the Life of a Fool.") 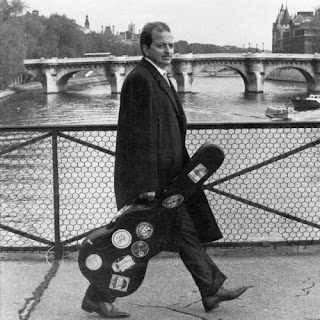 By 1957, Bonfa was beginning to split his time between New York City and Rio, touring the U.S. with singer Mary Martin, as well as writing and recording Brazilian film scores. The turning point in his career came in 1959 when film director Marcel Camus asked Bonfá to contribute some songs to his film version of the play Orfeo do Carnaval (to be renamed Black Orpheus on the screen). The director originally rejected "Manha de Carnaval" as the film's main theme, but after coming up with what he felt was an inferior second effort, Bonfá fought for his first tune and got his way, and "Manha de Carnaval" became a global pop/jazz/folk standard. In the late '50s and '60s and has been among the top ten standards played worldwide, according to The Guinness Book of World Records. 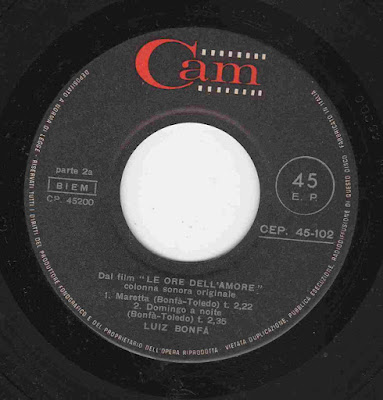 Here's "Domingo A Noite" from above EP.
Bonfá's discography also attests to his uniquely inventive mastery of Brazilian jazz guitar. Bonfá's guitar style was brassier and more penetrating than that of his major contemporary, João Gilberto, and was a frequent and adept soloist whereas Gilberto plays his own suave, intricate brand of rhythm guitar almost exclusively. Bonfá often played solo guitar in a polyphonic style, harmonizing melody lines in a manner similar to that made famous by Wes Montgomery in the US, or playing lead and rhythm parts simultaneously. As a composer and as a guitarist, Bonfá played a pivotal role in bridging the incumbent samba-canção style with the innovations of the bossa nova movement. 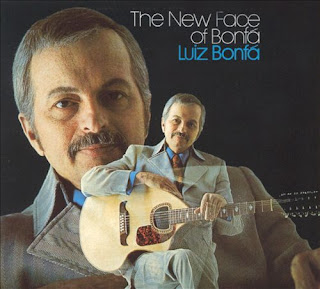 Bonfá began recording several albums for the American market on EMI Odeon (Capitol), Dot, Atlantic, Cook, Philips, Epic, and Verve, and he and his songs appeared prominently on the Jazz Samba Encore album with Jobim and Stan Getz. His songwriting skills were in demand in the most unpredictable places; for example, he wrote the schmaltzy "Almost in Love" for Elvis Presley (included in the forgettable 1968 film Live a Little, Love a Little). 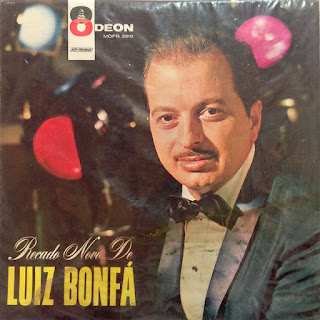 Bonfá's profile in America virtually disappeared after the '60s, although he continued to tour and write, eventually cutting over 50 albums. H continued living in the USA until 1971, when he moved permanently back to Brazil. He toured Europe and Australia during his later career, playing occasional dates in the USA.

He resurfaced in U.S. CD shops after a 15-year gap in 1989 with Non-Stop to Brazil for Chesky, followed by the ravishing The Bonfá Magic in 1991 (released domestically on Milestone) and 1993's Moods on GSP. 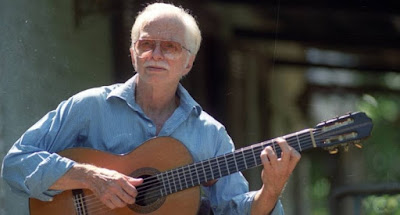 Bonfá died in Rio de Janeiro on January 12, 2001 from prostate cancer complicated by ischemia. He was 78 years old.

Below is a selected discography from various music blogs. Up-loaders credited with active links.

Thanx for ALL of the Luiz Bonfa. Recognize the artist but didn't have of his music (other than maybe on Bossa Nova comps.) = "new" hears here. LUV me a nice Bossa Nova.

Many thanks for 4 albums,Jacarandá is one classic