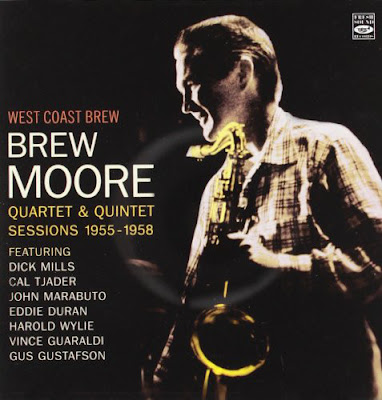 The tenor saxophonist Brew Moore (Milton Aubrey Moore Jr.) was born in Indianola, Mississippi.. He showed musical prowess at an early age. As a child of 7 he started playing popular tunes on a toy harmonica that he had received as a gift for his birthday. After a
few years he played in his junior high school’s band. Inspired by 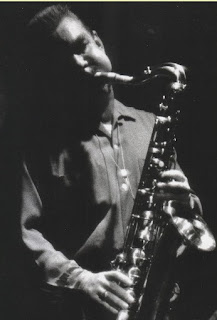 the style of Lester Young, he got his first professional experience playing in a Texas territorial band the summer before entering college. After graduating he entered Mississippi University to study music but left after only one semester to pursue a career as a tenor saxophonist.

Moore left the University of Mississippi in his first year to pursue a performing career and quickly hired by the Fred Ford’s Dixielanders. Between 1942 and 1947 he played with different local bands in both New Orleans and Memphis. 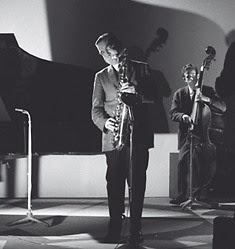 In 1948 he moved north to New York where he first heard the new music called bebop. As one who idolized Young (he even held his horn at the same unorthodox 120 degree angle), Moore was at first uncomfortable with it, but as he recalled for The New York Times critic John Wilson in 1968: "When I heard what Bird (Charlie Parker) had done for himself, I realized that Pres was not the complete messiah. So I combined Bird and Pres and my own thing." 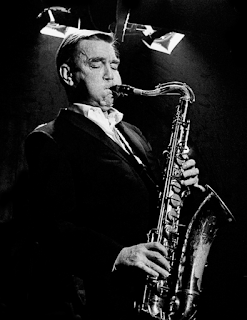 His first appearance on record as a sideman was with Howard McGee entitled Howard McGhee's All Stars .Moore became a fixture on the city's vibrant jazz scene, cutting his first album as a leader ("Brew Moore and His Playboys,") and working with Machito's orchestra and Claude Thornhill's Big Band, the Kai Winding sextet, Stan Getz and George Wallington among others.

He returned  to New York in 1948 and in 1949 he joined three of the "four brothers" from Woody Herman's celebrated Second Herd (Getz, Zoot Sims, Al Cohn) plus Allen Eager in a session that resulted in the album The Brothers for the Prestige Label.  In the early 50s he gigged with Bird and other beboppers of note at venues like Birdland. Pianist Gene DiNovi described him as "a 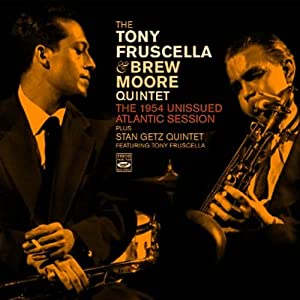 natural player. I remember him saying once that you should come to the saxophone as a child would—pick it up and blow. He had blond, straw-collared hair. Always with a farmer's cow-lick sticking up. He was a very simple, lovely person."

He left New York in 1954 for the West Coast, settling eventually in San Francisco where he found a congenial environment, fitting well into the beat generation culture personified by one of his acknowledged admirers, Jack Kerouac. His first record as the leader of The Brew Moore Qunitet was released in 1955. 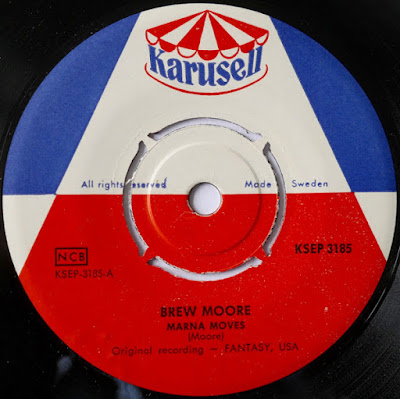 In 1959 due to alcoholism he fell seriously ill but recovered and in 1960 went on a tour of the Far East. Shortly after that, in 1961, he permanently moved to Scandinavia and lived in both Sweden and Denmark. He remained there the rest of his life, except for a brief
time spent in the Canaries, working regularly in local clubs, touring and recording; he led 9 recording session during his dozen years in Scandinavia. 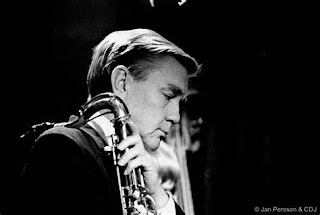 In August 1973, back in Copenhagen from a trip home to settle his late father's affairs (and, ironically, after years of economic uncertainty coming into a substantial inheritance), he fell down a flight of stairs in Tivoli Gardens after a characteristically bibulous night. He died on his way to hospital.

Storyville Records executive Alun Morgan suggests in liner notes for the CD reissue "No More Brew" that Moore's "total discography is small for a man of his musical stature" because of the saxophonist's unswerving adherence to his Lestorian roots. And indeed, as critic Scott Yanow has pointed out, "In the early '50s, 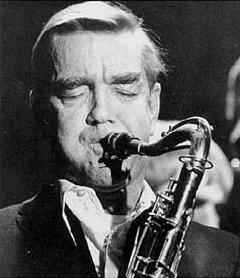 Moore recorded with fellow tenors Stan Getz, Al Cohn, Zoot Sims, and Alan Eager; at the time, they all sounded identical. Moore was the only one of the five who did not change his sound through the years."

Moore himself told critic Ralph Gleason in 1954, "The idea of playing for me is to compose a different, not always better I'm afraid, melody on the tune and basis of the original song, rather than construct a series of chord progressions around the original chords." An idea the more pre-bop inclined Gleason clearly approved of, noting that Moore "has two absolutely golden gifts. He swings like mad and he has soul . . . he also has a priceless gift for phrasing. . . . When Brew says it, he says it simply, but it rings true." 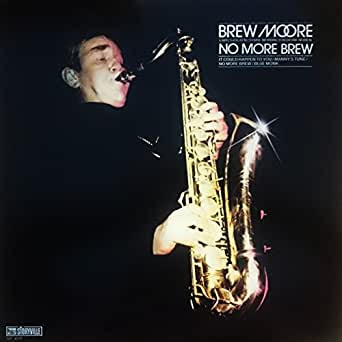 Brew’s is music is found on only a few recorded works, but his saxophone, like that of Charlie Parker, lives on as a collector’s item.  (Edited from Wikipedia & All About Jazz)


Brew Moore had a Danish girlfriend who died in 2011. Their daughter found Brew Moore's saxophone in the apartment, and commissioned Copenhagen wind-instrument shop I.K. Gottfried who overhauled and sold it at an undisclosed sum. (Source: saxmundstykker.dk)
Posted by boppinbob at 05:58


Lesterian tenor saxophonist Brew Moore (1924-1973) spent much of his career like an archetypal Fifties counterculture icon, always on the move, turning up in New York, or San Francisco, Copenhagen or Stockholm for a year or so, playing beautifully and then disappearing. Unsurprisingly, he left very few recordings, particularly of his early US career, which makes this collection, recorded on the West Coast, particularly valuable. (Edited fromBlue Sounds)

Personnel on #15:
BREW MOORE QUINTET
Brew Moore (ts), Cal Tjader (vib), Vince Guaraldi (p), Dean Reilly (b), Bobby Whilte (d).
Recorded at University College of Los Angeles, January, 1958
"An excellent cool-toned tenor saxophonist proud of the influence of Lester Young, Brew Moore only recorded on an infrequent basis during his career. He did make two albums for Fantasy. The three dates included on this set were all cut in San Francisco with local (and now obscure) musicians: trumpeter Dick Mills, pianist John Marabuto, bassist Max Hartstein, drummer Gus Gustofson and an unidentified guitarist. Marabuto contributed three originals; Mills wrote "Rotation," and the other four songs are familiar standards. Moore plays well (despite a hectic lifestyle, he was pretty consistent on records) and the music is relaxed and swinging."

"Brew Moore lived in San Francisco during the latter half of the 1950s, playing mostly with local musicians. On five of the six selections included on this album, Moore is matched with his fellow tenor Harold Wylie, pianist John Marabuto, bassist John Mosher and drummer John Markam. The music is pleasing and fairly typical of the era's cool jazz "Dues Blues" is taken from a slightly later concert matching Moore with vibraphonist Cal Tjader, pianist Vince Guaraldi, bassist Dean Reilly and drummer Bobby White."

Thanks to Fresh Sound Records for producing this album.

The story goes, Brew was playing with Lester Young on a recording session (may have been for TV, I don’t recall), and when Brew started blowing, Young turned to the producer and said, “If he’s playing ‘Lester Young,’ who am I going to play???”