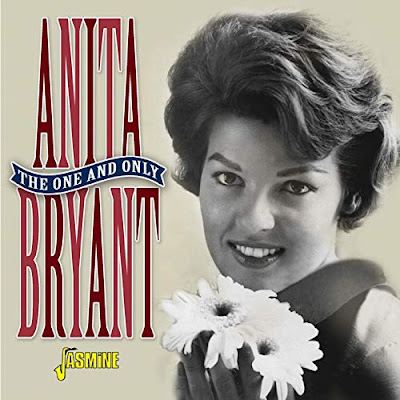 Anita Jane Bryant (born March 25, 1940) is an American singer and anti-gay rights activist. She scored four Top 40 hits in the United States in the late 1950s and early 1960s, including "Paper Roses" which reached No. 5 on the charts. She was also a former Miss Oklahoma beauty pageant winner, and was a brand ambassador from 1969 to 1980 for the Florida Citrus Commission 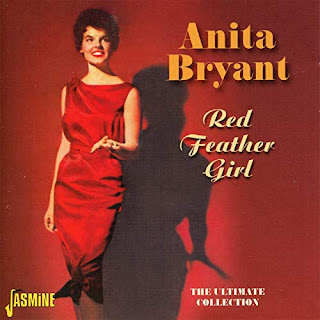 Although her family lived in Oklahoma City, entertainer Anita Bryant was born  at her grandparents' house in Barnsdall, Oklahoma. She lived in Velma-Alma, Tishomingo, Midwest City, and Tulsa. Her musical career began at a very early age. She first performed on-stage at the age of six, and three years later she won her first talent show. It was after this victory that she won a spot on Arthur Godfrey's talent show on television. From there her musical career blossomed, and the singer -- known as Oklahoma's "Red Feather Girl" -- made her recording debut in 1956 with the single "Sinful to Flirt." 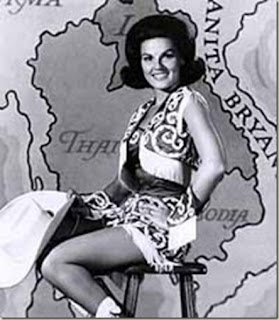 In 1958, she was crowned Miss Oklahoma and moved on to the Miss America pageant, where she came in third thanks to her musical talents. "'Till There Was You" from The Music Man was Bryant's first chart-topping hit in 1959. She released three albums on the Carlton label (Anita Bryant, In Your Home Tonight, and In My Little Corner of the World), and hit number one again in 1960 with Bert Kaempfert's "Wonderland of Night." 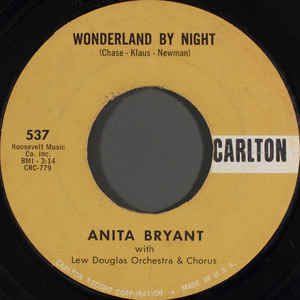 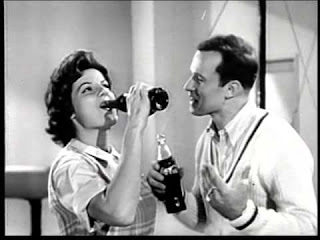 In 1962, Bryant switched to Columbia and recorded a series of inspirational titles as well as standard pop albums. From 1960 to 1967, Bryant served as a commercial spokeswoman for the Coca-Cola soft drink company. Her nickname was "The Coca-Cola Girl." In 1962 she changed to Columbia Records and continued to have a successful career. During this period she toured with the Billy Graham Crusade .For each Christmas from 1960 to 1966, she served as a member of Bob Hope's touring troupe of entertainers for the United Service Organizations Inc. (USO) visiting and appearing in shows for

In 1968 she performed at both the Democratic and Republican presidential conventions. She has entertained several times at the White House, and she sang at former Pres. Lyndon B. Johnson's 1973 funeral. From 1968 to 1980, she appeared in 76 television commercials as a spokeswoman for the Florida Citrus Commission.

In the 1970s she became a spokesperson for several products, including Florida orange juice, Coca-Cola, and Kraft Foods. She also authored a series of books. She also recorded several albums for the religious label Word, though the transition never lacked the boisterous singing style that had already been associated with her. 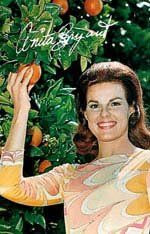 By the late 70’s, following her highly publicized anti-gay campaigning, gay activists in the country had ensured a boycott on Florida Citrus Commission due to their use of Bryant as their spokesman. The ban was supported by many celebrities, including Barbra Streisand , Bette Midler, Liza Minnelli, Bea Arthur, Paul Williams, John Waters, Carroll O'Connor, Mary Tyler Moore, and Jane Fonda. Anita’s outspoken position on the subject and the launch of the Anita Bryant Ministries eroded her commercial success.

Emboldened by her success in Florida, Bryant and her husband went national with their anti-gay message, but on October 14, 1977 while in Des Moines, Iowa,, a gay rights activist pushed a whipped cream pie into Anita Bryant’s face during a press conference. Her reaction was to say “Well, at least it’s a fruit pie.” 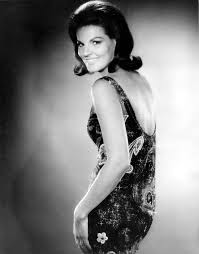 Good Housekeeping magazine named her the most admired woman in America in 1978, 1979 and 1980.She was also inducted into the Florida Citrus Hall of Fame in 1988. In 1980 Bryant and husband Bob Green divorced. In 1986 she was the recipient of the Ellis Island Medal of Honour by the Statue of Liberty-Ellis Island Foundation..

In 1990 she married Oklahoma native Charlie Dry, a former NASA test crewman. She opened and headlined music theaters in Eureka Springs, Arkansas, Branson, Missouri, and finally in Pigeon Forge, Tennessee. She continued to sing in numerous performances throughout the season at the Anita Bryant Theater in Branson, Missouri, and later at her own theater in Pigeon Forge, Tennessee. The Pigeon Forge venue filed for bankruptcy in 2001. 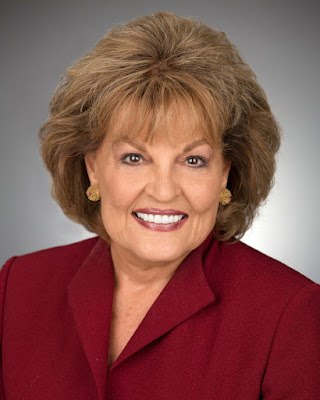 In 2002 Bryant returned to Oklahoma, and in 2005 she performed at Barnsdall's centennial celebration and to have a street renamed in her honour. She returned to her high school in Tulsa on April 21, 2007, to perform in the school's annual musical revue.

As of 2008 Anita still lives in Edmond, Oklahoma, and is doing charity work for various youth organizations while heading Anita Bryant Ministries International.  (Edited from IMD, AllMusic & Encyclopedia of Oklahoma, History and Culture)

For “Anita Bryant - The One and Only” go here:


Following on from the success of Jasmine's previous Anita Bryant collection ('Red Feather Girl) comes 'The One And Only'. This time focusing on two of her early albums 'Kisses Sweeter Than Wine' and 'In A Velvet Mood'
This release shows Anita's versatility. 'Kisses Sweeter Than Wine' was recorded in Nashville, backed by the Jordanaires and Anita Kerr Singers as well as the Nashville Symphony Orchestra and she excels on 'My Heart Cries For You', 'Vaya Con Dios' and 'Twelfth Of Never'.

'In A Velvet Mood' shows how well Anita could handle ballads and swingers. Her versions of 'Moon River', 'Tonight' and 'Volare' certainly confirm this. Also included is one of her most successful singles from that period, 'Wishing It Was You'.


A very big thank you to DaniRoxiCalifornia @ Loadsamusics Forum for active links.


A big thank you to Jake @ JukeBoxCity for active link.

Thank you so very much for this wonderful music!

Thank you for these albums, which I was enjoying. I always like to research whoever I listen to if I am unfamiliar with them. Unfortunately, Miss Bryant has a very suspect history of bigotry and prejudice against minorities, particularly she is a vehement campaigner against gay people, and appears to support oppressive cult religious organisations who would do harm to those people. So, in spite of her recordings being rather pleasant (if somewhat innocuous MOR) I will delete them. However, I must say thank you to you for all the great stuff you post here and for your hard work in allowing us to access it. Long may you continue. This woman is, I believe, a very rare aberration and I can manage without her.