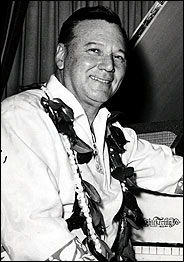 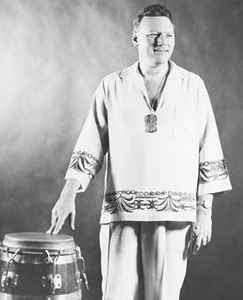 Denny was born in New York City and raised in Los Angeles. He studied classical piano and at a young age toured South America for four and a half years in the 1930s with the Don Dean Orchestra.This tour began Denny's fascination with Latin rhythms. Denny collected a large number of ethnic instruments from all over the world, which he used to spice up his stage performances.

After serving in the United States Army Air Forces in World War II, Denny returned to Los Angeles, in 1945 where he studied piano and composition under Dr. Wesley La Violette and orchestration under Arthur Lange at the Los Angeles Conservatory of Music. He later studied at the University of Southern California. 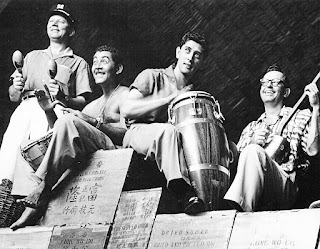 In January 1954, Don the Beachcomber brought Denny to Honolulu, for a two-week engagement. He stayed to form his own combo in 1955, performing under contract at the Shell Bar in the Hawaiian Village on Oahu and soon signing to Liberty Records. The original combo consisted of Augie Colon on percussion and birdcalls, Arthur Lyman on vibes, John Kramer on string bass, and Denny on piano. Lyman soon left to form his own group and future Herb Alpert sideman and Baja Marimba Band founder Julius Wechter replaced him. Harvey Ragsdale later replaced Kramer. 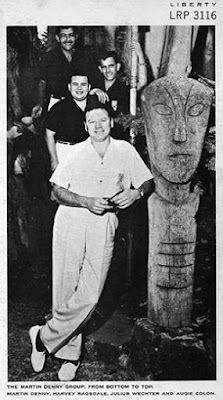 In 1955, the musician met his future wife, June, and married her the following year. His daughter, Christina was born a few years later. Denny described the music his combo played as "window dressing, a background". He built a collection of strange and exotic instruments with the help of several airline friends. They would bring Denny back these instruments and he would build arrangements around them. His music was a combination of ethnic styles: South Pacific, the Orient and Latin rhythms.

During an engagement at the Shell Bar, Denny discovered what would become his trademark and the birth of "exotica". The bar had a very exotic setting: a little pool of water right outside the bandstand, rocks and palm trees growing around, very quiet and relaxed. As the group played at night, Denny became aware of bullfrogs croaking. The croaking blended with the music and when the band stopped, so did the frogs. He thought it 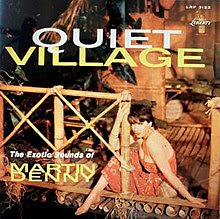 was a coincidence at first, but when he tried the tune again later, the same thing happened. This time, his band mates began doing all sorts of tropical bird calls as a gag. The band thought it nothing more than a joke.

The next day, someone approached Denny and asked if he would do the arrangement with the birds and frogs. He agreed. At rehearsal, he had the band do "Quiet Village “with each doing a bird call spaced apart. Denny did the frog part on a grooved cylinder and the whole thing became incorporated into the arrangement of "Quiet Village". It sold more than one million copies, and was awarded a gold disc. The album jacket was an influential factor guiding the fantasy of Denny's music. Denny's first dozen albums featured model Sandy Warner on the cover. 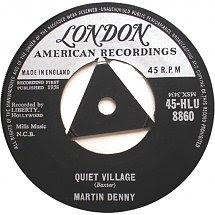 The Exotica album was recorded in December 1956 and released in 1957. In 1958, Dick Clark hosted Denny on American Bandstand. "Quiet Village" reached #2 on Billboard's charts in 1959 with the Exotica album reaching #1. He rode the charts of Cashbox and Variety also. Denny had as many as three or four albums on the charts simultaneously during his career. 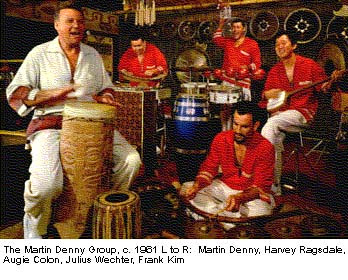 Although Denny only placed a few singles in the pop charts as he rode the wave of popularity of the exotica sound and interest in the new state of Hawaii, he continued to record for Liberty until 1969. He moved back to Oahu but toured in the States and appeared on a number of network television variety shows throughout the 1960s. 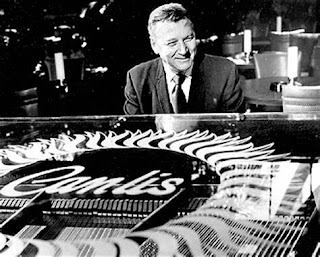 Denny continued to perform for decades after the initial exotica fad passed. He announced his retirement in 1985 but then reunited with Lyman, Colon, and Chang for a short club tour. In 1990, he toured Japan and recorded a live CD, Exotica 90, and soon after, he was recognized by the Hawaiian Association of Music's Hoku Award for lifetime achievement. Indeed, he survived long enough to see a revival in the mid-1990s that brought an extensive CD reissue of his original albums by Scamp Records. 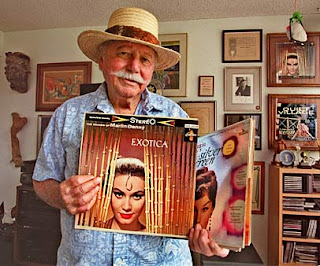 He continued to perform on occasion and was a tremendous supporter of the younger generation of musicians inspired by his music. Denny's final public performance, for a tsunami fundraiser at the Hawaii School for Girls, came less than three weeks before his death.

Denny died in Honolulu on March 2, 2005, aged 93. Following a private memorial service, his ashes were scattered at sea.  (Edited mainly from Wikipedia & spaceagepop)

For both albums go here:
https://www.upload.ee/files/9812610/Martin_Denny.rar.html