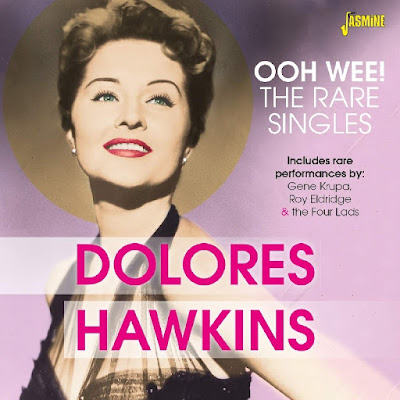 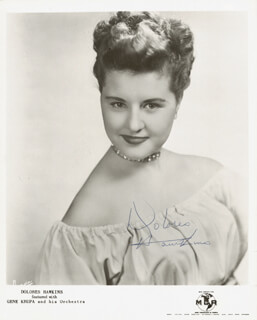 Hawkins was born in the Bushwick section of Brooklyn, and got an unusually early start on the way toward stardom. When she was only five, she began singing on many of the radio shows of the time that featured children. Among them were the Horn and Hardart Hour, several of Nick Kenny's enterprises, and somewhat later the Coast-to-Coast-on-a-Bus show under the direction of Madge Tucker. Singing away on such programs, Dolores picked up the rudiments of showmanship as she grew up and was ready for her career when the call came. 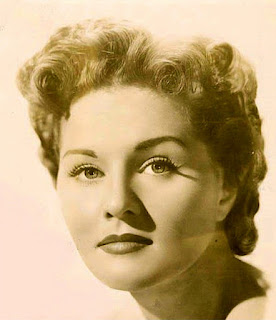 She remained with the radio programs until she was seventeen, when, a child no longer, she began working with various society dance orchestras around New York, giving a vocal lift to the round of business-men's bouncers and rhumbas that made up the program. One night, when she was singing for one of those orchestras, she was heard by Gene Krupa, who asked her to join his orchestra as featured vocalist. At almost the same time, she had similar offers from Sammy Kaye, Woody Herman, Blue Barron and Benny Goodman. 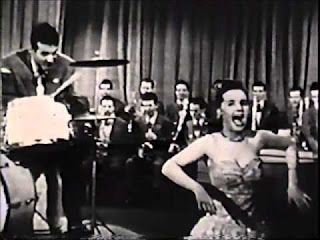 Throwing in her lot with Kruppa, she soon found she had made a splendid choice. Despite the hardships of one-night stands on tour with the orchestra (on-the-run meals, draughty auditoriums and dance-hall and the like) she consolidated her knowledge of show business and developed her singing style into the distinctive delivery that first made her stand out from other vocalists. With the great variety of audiences, plus the solid musical values of the Krupa outfit, she was soon singing to enormous applause. Around this time she recorded Bop Boogie with Gene and the band, a number that Krupa himself selected as one of her stepping-stones to success, and found herself becoming famous. 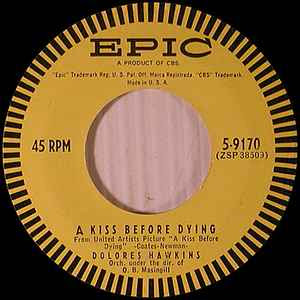 After leaving Kruppa she recorded “Hambone” with Red Saunders and his Orchestra and  "Heavenly Father"/"Rocks in My Bed" with The Four Lads in 1952. . She developed a striking night-club act, and overnight won rave notices, not only from the public and critics, but from club operators as well. From that time on, Delores was one of the ranking stars among vocalists, a girl who understood instinctively what should be done with a song, and who, moreover, had the voice to do it with, in addition to her looks. 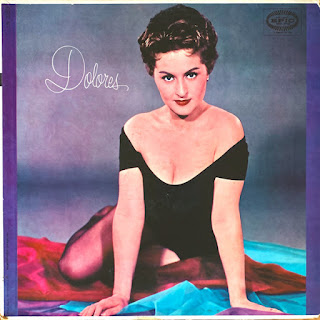 Walter Winchell mentioned the newcomer Hawkins in his column of March 25, 1953. He said that she was admired by female vocalists Gloria DeHaven and Monica Lewis during her performance at the Copacabana. Deciding to leave the orchestras and go out as a single, she began making appearances on television shows.

Hawkins released the single record "Scrap of Paper"/"I've Got A Letter", a 78 RPM, on OKeh Records in April 1953. The orchestra that accompanied her vocals was directed by Joe Reisman. In 1954 Hawkins recorded "George"/"Silly Man"' on Epic Records. Billboard Magazine commented that she sang the ballad pastiche "George" with "the coolness of an English Savoyard." She recorded three albums for Epic Records 1954-1956. She performed the title song for the 1956 film "A Kiss Before Dying" and in 1960, she sang two songs by Burton Lane and Alan Jay Lerner in MGM's remake of "The Adventures of Huckleberry Finn". She also appeared on the Johnny Carson Show, Perry Como Show, the Guy Mitchell Show and the Jackie Gleason Show. 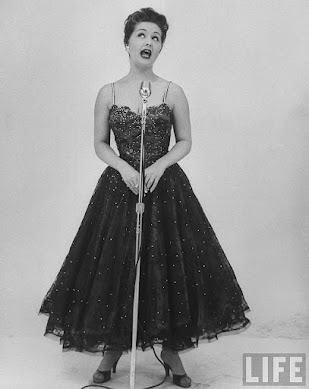 Then she seems to have disappeared from the public eye. One suggestion was that she was bringing up her only daughter Donna whose father was Don Seat, Dorothy’s manager in the 50’s. Then we find her in November 1968 when Hawkins performed in a "Cavalcade of Broadway" at Harry's American Showroom in Miami, Florida. According to her small obituary in the Tampa Bay Times, she moved to Clearwater in 1972 where she frequented the Light of Christ Catholic Church.

Almost completely forgotten by the music industry she died at Morton Plant Hospital, Clearwater, Florida on January 15, 1987. She was 58 years old. No cause of death was given.

Dolores Hawkins had a smoky sound that was distinctly her own, and whether you are a long time fan, or just now discovering her, you're in for more than two hours of incomparable pop and jazz by one of the finest vocalists of the era.

Features two versions of 'Hambone' with Red Saunders, which was probably the biggest hit of her career and on the rare second version she repeatedly yells out an orgasmic 'Yeah!', which somehow got past the censors. She also cut four sides with the Four Lads, including the torchy 'Rocks In My Bed' They are all included in this superb package along with her Gene Krupa recordings, some rare Krupa broadcasts, and 40 singles of her own, including two songs by Alan Jay Lerner and Burton Lane from the film 'The Adventures of Huckleberry Finn.'

As of 2018, most of this wonderful collection is on CD for the very first time, beautifully restored in this jam-packed double set. (Jasmine notes)

A big thank you to the Rockin’ Bandit for the loan of above album.

BB, You have Dorothy instead of Dolores on the heading.
Thanks for these, great voice.
- D

Hi Denis, Don't worry it's just a senile moment. Thanks for pointing it out.