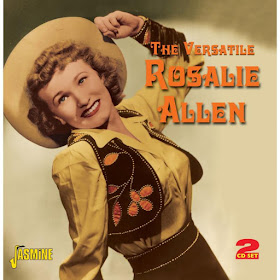 Rosalie Allen (born Julie Marlene Bedra; June 27, 1924 – September 23, 2003) was an American country singer, songwriter, guitarist, columnist and television and radio host who was noted for her yodelling. She was one of the most successful female country singers of the late 1940s. Billed variously as "The Prairie Star" and the "Queen of the Yodellers", she enjoyed a string of hit records, including "Guitar Polka", "Rose of the Alamo" and "Quicksilver", and became a pioneering broadcaster, and was the first woman inducted into the Country Music DJ Hall of Fame. 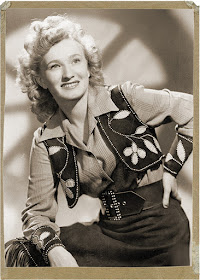 Rosalie Allen was born in Old Forge, Lackawanna County, Pennsylvania (some sources give her given birth name as Julia, or Juliana rather than Julie.) Allen grew up the daughter of a Polish immigrant miner in a family of 12 children in Pennsylvania. During the Great Depression, at age nine, she worked as a dishwasher to help with the family's finances. But through those times, she had a strong love for music and learned many a song by radio or playing the records as well as learning the art of yodelling. Allen taught herself to sing and play her brother’s guitar as a child. 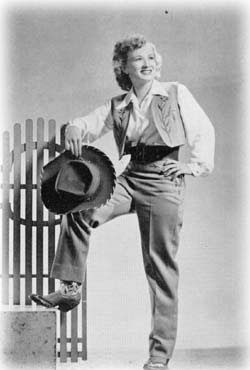 Her inspirations included some of the most notable cowgirl singers of the era: Patsy Montana, whose "I Want to be a Cowboy's Sweetheart" sold over a million copies in 1935, and the Girls of the Golden West, a sister act whose unique harmony yodelling had made them major stars of hillbilly radio. In 1939, she was affectionately known as the "Queen of the Hillbillies" as well as "Champion Girl Yodeler of America" and "Queen of the Yodellers" after winning a yodelling contest, and continued to use this moniker throughout her career. The contest's prize was to sing on WBRE in Wilkes-Barre, Pennsylvania, a performance which was her radio debut. She then headed for York, Pennsylvania, where she worked as the featured vocalist with Shorty Fincher's Prairie Pals.

By 1943 she moved to New York and performed on Denver Darling's Swing Billies pseudo-western radio show. She made her first commercial recordings with Darling, cutting both "Put Your Arms Around Me" and "Don't Wait Too Long to Forgive", on which Darling was billed as Tex Grande, for the local De Luxe label in 1944. That year she became a regular on Zebe Carver's Hill Country Jamboree show, which led to an offer of her own show the same year and was, for a time, the only country DJ in the city. The half-hour program, Prairie Stars on WOV in New York, aired six nights a week and was so popular that Country Music magazine named her the most famous country music personality in Manhattan. The show ran until 1956. 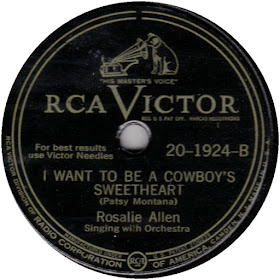 In 1945 Allen signed with RCA Victor, an artist-label association that would result in much of her best work. Her first hit was a reworking of "I Want to Be a Cowboy's Sweetheart" and both it and "Guitar Polka" found their way into the upper echelons of 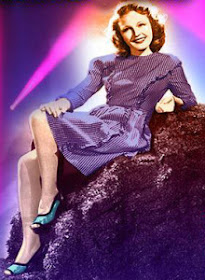 the country chart in 1946. Allen's vocal pyrotechnics on "He Taught Me How to Yodel" helped to popularise Kenny Roberts's song, and a later association with Elton Britt produced several fine duets including "Quicksilver", "Beyond the Sunset" and "The Yodel Blues" (all 1949) and "Mockin' Bird Hill" (1950).

Allen appeared in the film Village Barn (1949) and that year began a four-year stint as the host of her own television show. She opened New York's first retail outlet devoted to country music called Rosalie Allen's Hillbilly Music Center on West 54th Street in New York City. Her writings of The Rosalie Allen Hillbilly appeared in columns for National Jamboree and Country Sound Roundup. 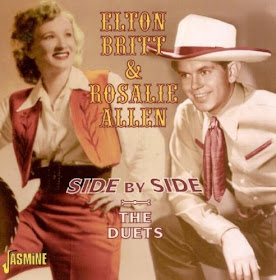 Teaming up with Elton Britt again the duo also recorded an album for Waldorf Records in the mid-'50s -- now released as Starring Elton Britt and Rosalie Allen on the Grand Award label. She still released a number of albums including Rodeo in 1959. As rock 'n' roll pushed country aside, she moved to Alabama and performed less, even though Patsy Montana urged her to return to the recording studio but she was stopped by a combination of health and marital problems, as well as by disputes with Nashville producers.

Allen elected to stay home to raise her daughter, except for a few special appearances. At one point she worked as a cook for Jim and Tammy Faye Bakker for whom her son-in-law was a security guard. Her final album was The Queen Of The Yodelers, released in 1983. Her later years were spent with her daughter and son-in-law in the high desert of California, near Palmdale. 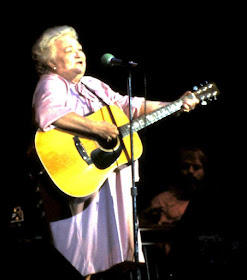 In 1999 her work in radio was recognized and she was inducted into the Country Music Disc Jockey Hall of Fame. In her later life, she suffered from diabetes and other ailments. After a brief illness with congestive heart failure, Allen died on September 23, 2003 in Van Nuys, California at the age of 79. At the time of her death she used the name Julia Gilbert, with the surname being that of her last husband.

In an article about her radio career, The New York Times in 1946 called Miss Allen ''a rare four-leafed clover in a field that was one of man's last strongholds.'’  (Edited mainly from Wikipedia, AllMusic & The Independent)